A recent comment to one of my posts had me digging through my Linden collection and firing up the scanner.

One reader mentioned in my most recent 'One Sheet, One Set' column that the player behind Roenick looked like Trevor Linden. 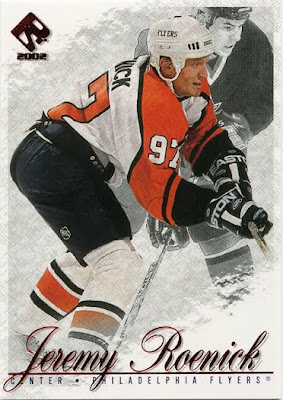 2001/02 Private Stock
#74 Jeremy Roenick
I am still trying to figure out if it is him or not. I'm thinking it is, but I have not been able to find any hard evidence confirming this. It's either him or Keith Primeau in my opinion.

Nonetheless, the reader asked if there were other cards that had Linden in the shot of another player's card. Indeed there are....and I do count them in my collection.

In my search for all things Linden, I have come across 3 cards (not counting their parallels) and just recently confirmed a fourth. Here are the goods. 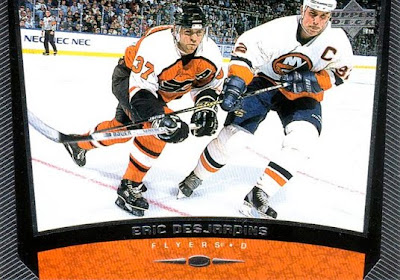 1998/99 Upper Deck
#150 Eric Desjardins
This card is one that I just found out about a little while ago. Clearly it is Linden in the shot. I haven't tracked this one down yet (or the 3 parallels that go with it) but will be adding them to my wantlist. 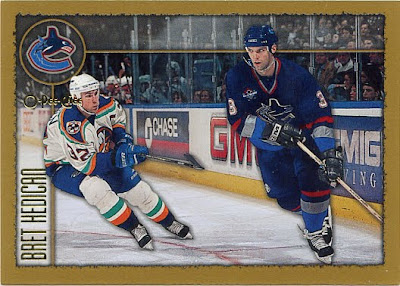 1998/99 Topps
O-Pee-Chee #87 Bret Hedican
This was the first Linden 'cameo' card that I officially included in my wantlist. I had busted a few packs of the product back in the day and noticed Linden more than Hedican in the photo.

I thought it looked cool and decided that I would try to track down all the other parallels (there are 4 in total...all of which I have). 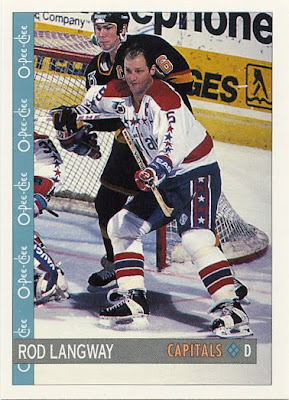 1992/93 O-Pee-Chee
#347 Rod Langway
This one was pointed out to me a few years ago. While there is no question that it is indeed Linden in front of the net, this one wasn't as pronounced as the others. Still, I figured I'd include it. There were no parallels or anything so it was an easy decision at the time. 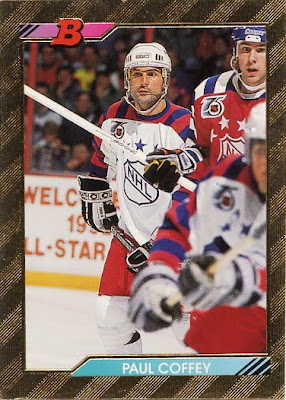 1992/93 Bowman
#226 Paul Coffey AS Gold Foil
Believe it or not, I just stumbled upon this one a few nights ago. I was going through a few more base cards and was separating the gold foil all-star cards from my 92/93 Bowman set. I saw Linden peeking out the corner of this card and decided to put it aside. Why not.

So there you have it. A few Linden cameos. If anyone happens to come across any others, I'd appreciate a heads up.
Posted by bamlinden at 11:08 PM