RAISE THE CUP - A Winning Pair

A slight delay from me in showing off the second card in this post. I wanted to get the first on in the mail before I showed off this particularly prominent pair of pieces for your perusal.

I recently saw this first card in another person's show and tell post. I had never seen this card (or the set it came from) before. I was thrilled to learn that it was an upgrade (the original had a colored jersey piece). He was more than happy to work out a trade for the white jersey colored card. 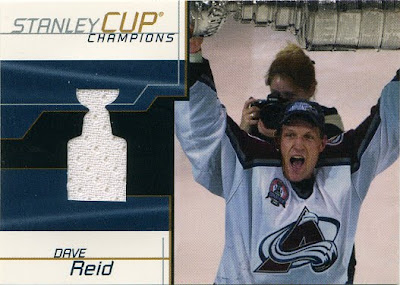 2001/02 Be A Player Memorabilia
Stanley Cup Champions
#CA-13 Dave Reid
Now, I was also told that this card is limited to just 40 copies. What a great piece.

And guess what the concept is of this set? You guessed it, the Stanley Cup Champions - Colorado Avalanche - raising the Cup over their heads.

The only card not showing a player with the Cup over his head is Burnaby Joe.....he dished the Cup over to Bourque rather than hoist it.

While I'd love to build this set, some of the biggies don't come cheap. This Reid will have to act as the representative of the set for now.

And I'm not complaining.

The second (and last) card in this post comes courtesy of a person whom I've gained a lot of respect and admiration for over the past year. And it's a fitting card to post today seeing as he's become the newest head coach of the Carolina Hurricanes (and I think he'll do a bang up job). 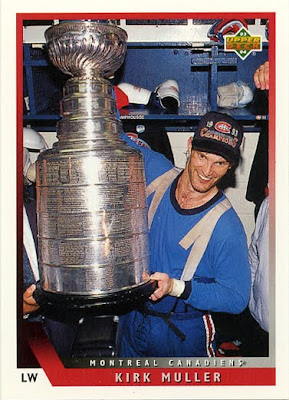 1993/94 Upper Deck
#148 Kirk Muller
A couple weeks ago, one of the local card shops had their Traders Night. It's something that I've tried to attend more and more of this past year. A great way to get collectors together to 'talk shop'.....or eat pizza.......or both.

Anyways, Brian (Captain Canuck) over at Just A Bit Offside is someone always offering up a 'how's she going?' when I arrive at the shop. This month though he also asked if I was collecting 'Cup raiser' cards...while pulling this Muller out of his trade box.

He plunked it down in front of me and said 'Here you go'.

Now to most people, this card is just a penny common from a 20-year-old set. To me, it's a fine addition to a set I've been slowly building over a couple years.

A simple gesture of awareness and kindness....something I LOVE about this hobby.

Thanks very much (again) Brian. It will sit proudly in the binder.

Gotta root for Captain Kirk. In his 19-year NHL career, this was his only Cup championship. Surprisingly, he only played with the Habs for a couple seasons before he was off to the New York Islanders. Signing with the defending champs from Dallas a few years later almost notched him a second Cup, but the team he was originally drafted by, the New Jersey Devils, were one better that year.

I'm looking forward to seeing the type of coach he is in Carolina (I sense 'player's coach') and the impact he has on the team this year and over the next couple seasons. Carolina's got a better team than they are showing on the ice. Should be interesting.