PACK RIPPING: My Niece Has Some Good Luck

Before I get into some of my recent 'Trade Night' pickups, I thought I'd take a moment to show you a couple of pack breaks that my niece helped me out with.

Last weekend was the last card show of the year. It just so happened that it was going on in the same building as the library my niece and I were going to. So we stopped in and took a quick browse around.

After finding very little, I decided to buy a few packs of cards. Rarely do I do this as I am more of a 'I'll save my money for cards for my pc' guy, but with my niece there I thought it would be fun to bust some packs. 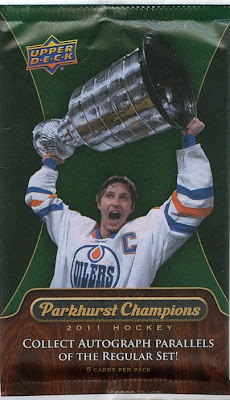 One of the products I went to was 2011/12 Parkhust Champions - one of my favorite sets of the year so far.

We only purchased two packs since I had some of the singles already. 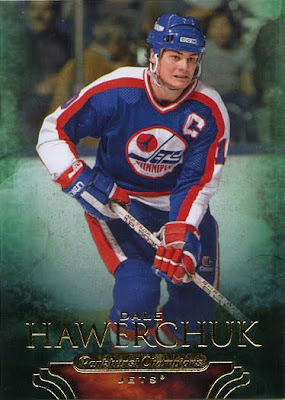 The base cards are pretty nice. Good player selection, nice colors and a simple design.

But these cards weren't what I was hoping to land. 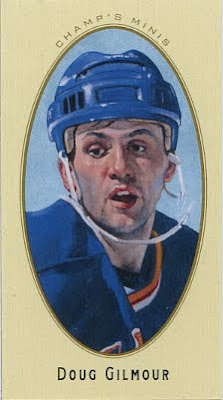 In our two packs, my niece pulled out this Doug Gilmour mini. They fall in 1:2 packs so it wasn't a huge surprise to find one.

Still, in a two-pack break, it was nice to at least play the odds.

Did I say play them? My niece beat them.

With her second pack, she pulled this... 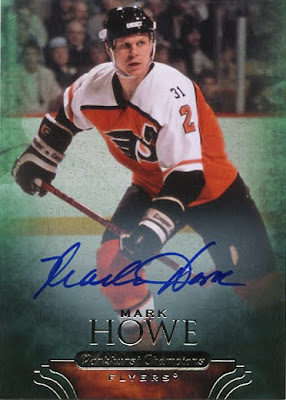 Now while I would have loved a plethora of other guys, this auto was a welcome sight in a simple two-pack break.


Fast forward to last night. My niece and I are out again (oddly enough to the library) and I asked if she wanted to stop at Toys R' Us to see if I can pick up one last Christmas gift for her brother.

While I didn't find what I was looking for, I did come across a few of these packs. 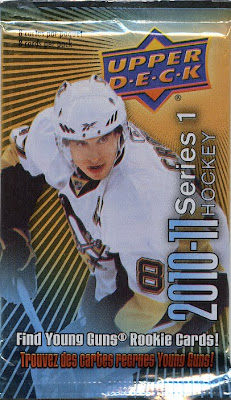 At a buck a piece, I couldn't resist. Who knows, a little luck from my niece might pay off again.

Can you guess where this is going? 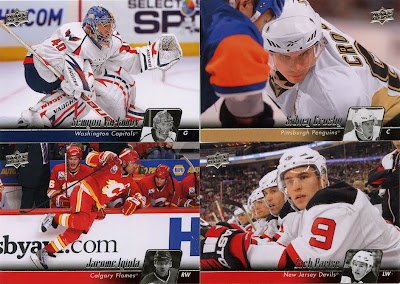 With the first few packs my niece opened, she commented on how the photos look really nice (these are some of her faves). She said I should use them for my 'Cardboard Photography' posts. And she's right. 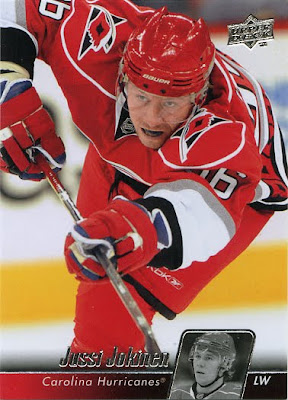 There were some vertical cards that caught her eye too. This Jokinen being the most memorable. 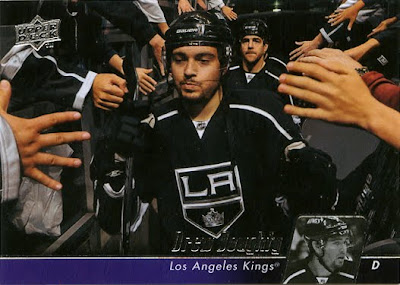 It's funny, after seeing that card, all I could think about was this one... 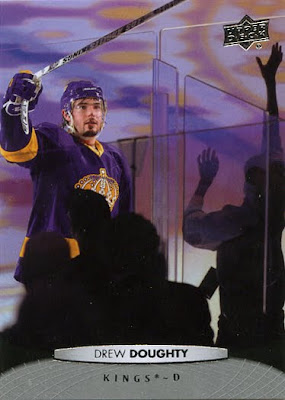 Drew is clearly getting the short end of the stick when it comes to actual hockey playing shots. Is he in that big of a funk?

Once again, there were more than just base cards in the 10 packs I purchased. Again, can you guess where this is heading? 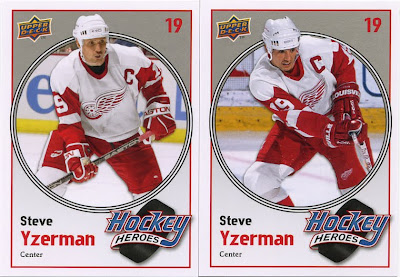 A pair of Yzerman insert cards - a nice start. 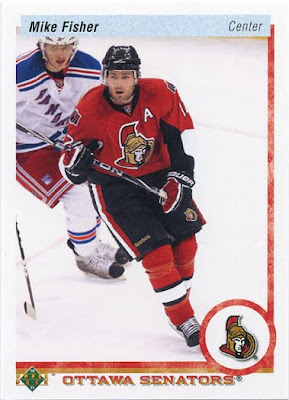 A retro Mike Fisher. My niece liked this one. I like it too.

And yes - THREE Young Guns. With these cards coming in 1:4 packs, my niece once again beat the odds.

After the first couple of packs, I told my niece that the 'big card' in the set was the Taylor Hall Young Gun.

With just a couple packs left to open, she sifted through and blurted out "Taylor Hall". 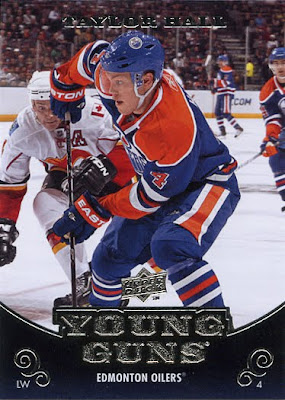 Are you kidding me! What awesome luck.

On a side note, she'll be picking my Sport Select tickets this weekend, my playoff hockey pool picks and the magic Power Max lottery ticket numbers. But not until we hit the library. I'm not superstitious or anything. :)

Nicely done kiddo. I hope you had as much fun as I did.
Posted by bamlinden at 12:13 PM