I'm making this one short and sweet.

Last week, In The Game released its Captain-C product.  In it were a pair of Linden cards that had me do the ol' jaw drop.

I was stunned to see that less than 24 hours after the product hit the shelves, one of those cards hit ebay.  And I had the radar on - big time.

The next morning (for some reason, I woke up early on Saturday....weird), I saw the other one of these two cards on ebay.....with a Buy It Now that was reasonable enough for me to hit it (by 'reasonable' I mean....if I didn't snag it right then and there - it would be gone in a matter of minutes).

So now I'm sitting with one in my pocket and the other about to end the next night.  So I had my radar on even more.

So much so that I let all the other Linden collectors know that I was bidding  - and big - to complete the 'set'.

I was pretty nervous watching the end of the auction, and thankfully I got the card for a decent price.

Today, both copies were sitting at the post office ready for me to pick up.

How excited was I?  I was opening bubble envelopes on the post office's counter.

And then it was a quick trip directly home to scan the cards in and encase them in protective cases.

Without further ado.....here are the newest additions to the family. 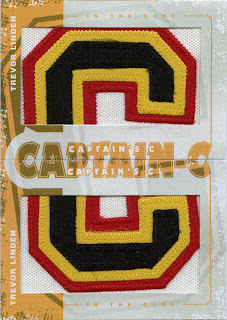 These cards look absolutely stunning in person.  The big patch windows, the obvious design elements that make the pair just pop, but most importantly - this is the 'C' that comes from Linden's jersey.  The symbol of leadership on (and off) the ice.

If these are the only two cards I get from this product....I'd be happy.

(But we all know that's not going to happen).
Posted by bamlinden at 12:17 AM