A quick mailday (for what had been a nice, slow month of pc pickups) and a bit of a dilemma tosses a couple Linden cards your way.

I knew that at the Toronto Spring Expo this year there would be a few Linden redemption cards up for grabs.  Some of them were the coveted 1/1's, but this one was a nice pick numbered to 19. 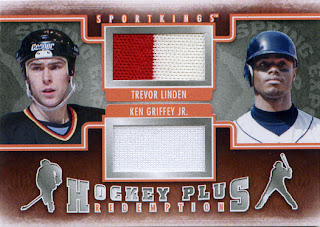 I was really excited to see Trev teamed up with someone from another sport.  My only concern is that this might be a sign of things to come (gulp).

I had decided to pass on the first couple of copies to hit the open market (which surprisingly took a while) as the asking prices were a little too high.  In a couple of instances, the card was bundled with the rest of the cards from the set (making it impossible to go after).

Not to mention, the lack of color on my card.  Most have the single white swatch for Griffey Jr., but no white in the Linden piece.


That leads me to the other Linden that hit the mailbox last week.  And another low numbered card for the collection. 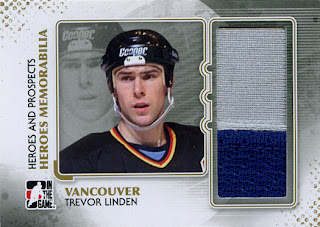 I saw the first few copies of this card come and go and decided that I needed to pull the trigger on this one before the product completely dried up.

I snagged it for a very nice price and was happy to see it arrive in a very well protected bubble envelope.

Sadly, that's where the fun ended and the dilemma started. 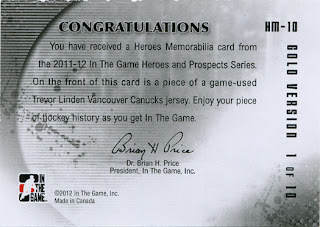 As you can see from the back of the card, there's some damage to the top edge.  The scan only shows part of the story.  There is some definite denting and chipping that (to me) makes the card very undesirable.

I e-mailed the seller and he was very apologetic.  He's been working with me to rectify the issue.  I have no doubt that he was unaware of the issue when he sent the card off.

I mentioned to him that I would contact ITG to see if they would issue a replacement.  Sadly, in this instance, the answer was no.  Because I was not the original purchaser of the card I would not be able to send it to them for fixing.  Which I am not surprised with and completely respect and understand.

The seller has given me a couple options to consider.

One is to keep the damaged card and the seller would refund me 25% of the price (which would be about $10-12).

The other is to return the card and get a full refund.  Of course, I would be on the hook for shipping the card back to him.

So do I return a rare card and hope that another one comes along?  Do I keep it...knowing that it's damaged?

I decided tonight to return the card.  It would bug me too much to know it's in the collection.  And I would still hunt down another copy to upgrade (which would leave me with a damaged card that I would try to get my money back on).

Bummed.....but the card is back in the envelope ready to be returned.
Posted by bamlinden at 11:03 PM