It was so nice to sleep in, not have to rush to go anywhere and catch up with my niece and nephew.  And tonight I can take a moment to fix up a blog post (albeit a small one......I'll have more tomorrow).

Amidst the craziness at work, I was able to pull away and take in the monthly traders night here in town.  There were a couple guys there who mentioned just how tired I looked......but that couldn't stop my enjoyment of the proceedings.

I tried my hand at pack wars again (and ended up with another victory.....not quite as profitable as last month's, but still), made a couple trades and didn't even cave buying a box full of regret.

So I'll start off my weekend posts with a couple quick adds to my Raise The Cup project.  It's been pretty slow lately when it comes to that pc.  That said, I do have a few nice adds that Brad sent my way (which I promise I will get to on Sunday).  These two come from the most recent Contenders release. 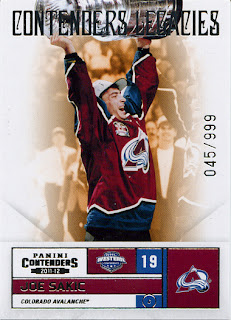 I'm just going to come out and say it.  I think that my project has now influenced three 'Cup raising' insert sets.  I've never seen more Cup raised over heads in a long time.  The only beef with this newest design is that the photo of the Cup is cropped off.  I would think that the Cup is the key aspect of the card.  But no.

Now the Sakic wasn't the only card from this set I tracked down.  And it took every inch of willpower not to tear it up upon trading for it. 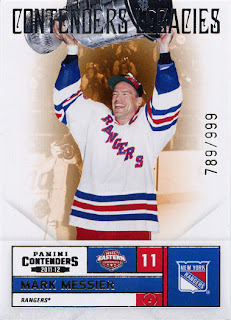 But alas, he's got that trophy in the air.  I'm powerless to the project.  So I traded for it.  Yuck.

I'm just going to shove it in the binder and try to forget the whole thing ever happened.