Just a quick note on this project (more for my own records).

I recently gained three new cards for the project (after many months of inactivity).  One of which was a nice Stefan Meyer Cup gold rc. 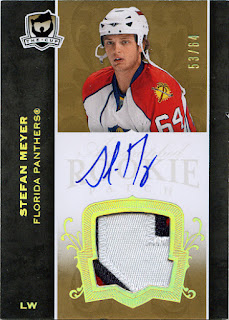 I knew at the time that I picked up the card that there was a Meyer collector who was trying to track down all 64 copies.

I e-mailed him and let him know that I had this card.  He was interested and I mentioned (as I have before in other instances) that all I was looking for in trade was another card /64.

Well, last week at the local card show.....I found another copy of this card.

I let the person know that I now had two copies.  One for trade and one for sale.  He bit on the one for sale.  I got his address and prepared the envelope to ship.

That's when I realized that he lived overseas.  Not your simple trip within Canada or to the US.

So I decided to kill two birds with one stone.  I decided to offer the second card up for sale and he quickly agreed.

Both cards are now ready to ship and I'll be hitting the post office tomorrow to send them off.