It's pretty rare when the monthly trader night yields any significant Linden pickups.  The odd base card for sure, inserts, an auto or jersey and every once in a while a "tough pull".

Case in point, this beauty of an auto from 2005/06 SPGU.  The card was a tough find to begin with seeing as it had eluded me for five years, but when it was pulled fresh from a pack right in front of me at trade night....I knew the guy wasn't leaving until we made a trade.

Upper Deck's high-end product The Cup has been a bit of a "love/hate" for me.  I really like that he's in an ultra high-end product because of some of the stunning cards made, but the dollar price associated with some of them venture into the ridiculous stage.  Even for a die-hard Linden collector.

One of the nicest was pulled in the store tonight.  I wasn't standing next to the event....but the head turns and the calls over made me realize something big was going on.

As I ventured over to the counter I could see the remnants of an opened Cup tin.....ouch.  Then in one fell swoop, this card was revealed to me... 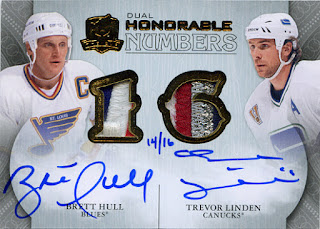 Oh daddy!  I think I cringed more than anything.  Here was what would probably be the best opportunity to pick up a copy of this card - it's right in front of me - and boy was it ever nice.

The next challenge was to determine a fair price.  There's one currently on ebay and the price is skyrocketing.  Partially because of the stunning patches but also because it's the 16/16 copy and will command a premium.  I could care less about that.

There was only one other copy that had shown up on ebay and the end price was a little more reasonable.  The big question for me was "what is the maximum I am willing to shell out right here....right now for this card?"  It was a tough one, but I came up with my number.

The seller wanted a little more and I could understand that.  I even told him that the card would likely fetch that price in the open market.  Then again, maybe it wouldn't.  I have no idea.

I thought my price was fair and the other party agreed.  We shook hands and I went off in search of a bank machine.

The card is now safe at home with me and is one heck of an addition to the pc.  The signatures are awesome and the patch piece on the Linden is pretty cool (even for a somewhat small die-cut window....lame for a high-end product).

No question about it, this card tops the list of Linden pulls locally.  She'll be tough to beat.

And boy am I ever happy to cross it off the list.

I was really disciplined at trade night tonight.  No impulse buys.  I'm saving up for ITG's upcoming 'Decades 90s' release as well as 'Ultimate Memorabilia 12'.  Both should destroy my pocketbook nicely.