As many of you know, I'm a huge fan for sports docs - specifically the 30 for 30 series put out by ESPN.

They have recently started doing some "shorts" which appear on their website.  One of which was highly anticipated by yours truly.  Why?  Well, because the subject of the short was a baseball card.

For over 20 years now, the t206 Honus Wagner card once owned by Wayne Gretzky and (then) LA Kings owner Bruce McNall has been one of the most expensive, controversial, coveted and admired sportscards in the hobby.  It has developed a fairy tale-like story that just grows in stature with each passing year.

ESPN recognized this and recently posted a 15 minute documentary on the card.  Taking a look at the history of tobacco cards at the turn of the century, the rarity of this particular Wagner, the purchase by Gretzky and McNall and the subsequent explosion of interest and intrigue.

While it only scratches the surface of the story, it's a pretty interesting watch and I highly recommend it.

After watching this piece, I have made a pretty quick decision as to what my March book will be... 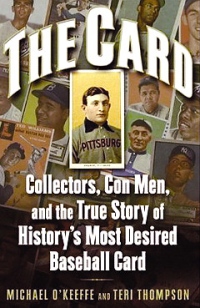