I've known about this doc for months and have missed opportunities in the past to view it on the big screen here in town, but tonight I decided that I would stop procrastinating, sit down and finally watch this movie.

And am I ever glad I did.

I think some of the best documentaries (sports or not) are more about the people than the events.  By the end of this documentary, it was the group - the Brigade - that really resonated with me.  So many great messages. 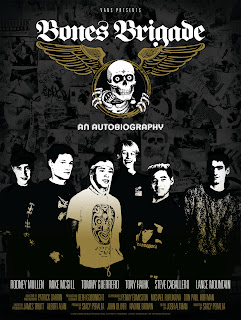 
Documentary filmmaker Stacy Peralta continues his skateboarding docs with a killer sequel (if you could call it that) to his critically acclaimed 'Dogtown & Z-Boys' (which if you haven't seen, I suggest you do....especially before seeing this film).  Bones Brigade picks up after Stacy's success as a skater and shows the next generation of skaters and the evolution of the sport.

The birth of skateboarding as it is known today is a direct result of the guys focused on in the film.  And are they ever an eclectic mix.  Not only do we meet the prodigy Tony Hawk in his infancy, but we learn of equally gifted Steve Caballero.

Rodney Mullen is an amazing person to both watch and listen to in the film.  He created tricks and moves that revolutionized the way people skate.  He says skateboarding was a way for him to communicate and create.  His passion and perfectionism is equaled by his love for the sport.

It's amazing to hear them talk with such passion and it's equally cool to see that this group of guys were such a positive influence in so many ways.

And it has everything.  All the interviews, all the photos, all the archive video, great music, excellent pace.  There's very little to shoot down when I think about it.

Bones Brigade: An Autobiography a fantastic story and I highly recommend it.  I plan on getting a copy and watching it with my nephew.  I can only hope he gets inspired by it as much as I did.

Here's the trailer so you can get a taste.