OUTSIDE THE BOX - 15 Boxes Of ITG Canadiana

When I prepared to set off to the Toronto Expo a couple weeks ago, I knew there would be some Linden hunting, some new product breaking and some specific request fulfilling.

I did not expect my Friday to consist of one of the biggest box breaks I've ever done.  And by "biggest" I don't mean in terms of biggest hit.... 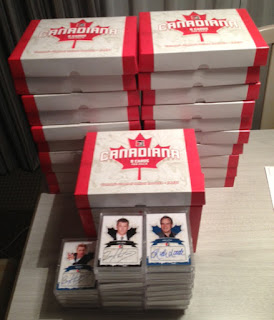 I have been on the lookout for a while for some Canadiana singles for a fellow Linden collector.  Carrying around somebody else's wantlist gives me the chance to dig a little more during average or even boring card shows or if I happen upon a card store.

When I found boxes of Canadiana selling for $40 (that's about 75% off regular price) I decided to try a couple boxes.

And then a couple more.

And then half a case more.

And then I texted the fellow Linden collector and bought the other half of the case for him.

Now I could have brought them all back unopened, but that would have meant checking another piece of luggage at the airport and getting dinged about $30.

I had more fun opening it and it could all be tucked into one of my suitcases. 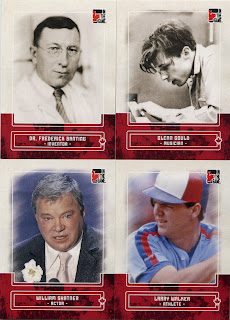 For those of you not familiar with Canadiana, it's a product that celebrates all things Canada.  From sports to politics to entertainers to inventors, Canadiana is a trading card look at our country's history. 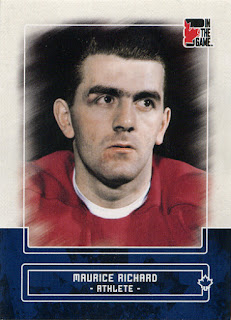 There are also blue parallels of the base cards and are limited to just 50 copies each.  I pulled 23 blue base and this Maurice Richard is a great example of the simplicity and cleanliness of the design.

I like the fonts and brushed background.  It works for both old and new photos, color or black & white.  There's decent photo selection although there are a few pics that are a tad on the blurry side. 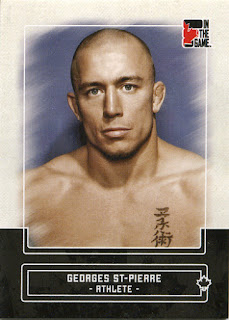 This onyx parallel is limited to just 5 copies.  I've heard that they often sell quite low on the secondary market.  I'm hoping that's not the case with mine.  I'd love to recoup some dough and this could be a big help. 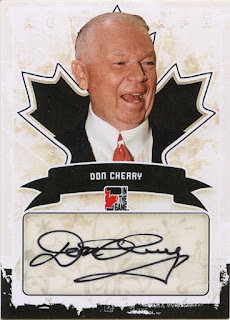 What would an In The Game product be without autographs.  Yes, they are sticker autos but ITG does a really nice job ensuring that the sticker works with the card design (unlike some of the slappers on the new Fleer Retro hockey product....ouch).

A simple design again and I really like the black look with the black pen (done with purpose I might add).

Don Cherry has one nice looking sig and was one of my more favourites out of the break.  In total I pulled 18 (2 duplicates).  Heads up though.  Most people in the product have 2 autos (different photos on each) so there would be a Don Cherry 1 and a Don Cherry 2. 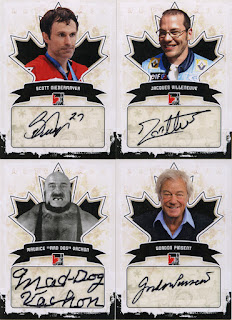 Some of the other faves include a nice Scott Niedermayer and a sweet "Mad Dog" Vachon.

There are also blue auto parallels and the ultra rare red auto 1/1's.

No reds for me, but I did hit six blues. 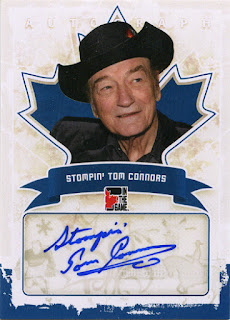 This one hands down was the best.  Anybody who doesn't know who Stompin' Tom is.....go do your homework immediately.  Do not look at or think about anything hockey.  And return when you are caught up.

Hockey's national anthem (and many feel that it's Canada's unofficial anthem as well).  Awesome. 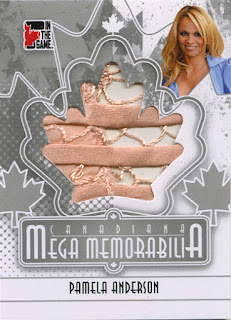 And now for the Pamela Anderson section of the post.

Yes, what would a product about Canada be without the buxom blonde from Baywatch.  She makes an appearance (actually.....many) in the set.

This is the Mega Memorabilia insert set and is a pretty simple concept.  It works great because there's lots of memorabilia (in this instance...not as much).

Some of these silver versions are limited (90 copies) and some extremely limited (20 copies). 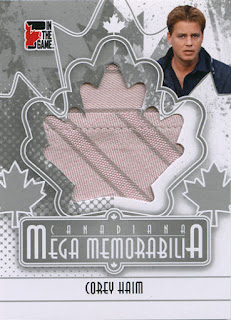 This might be the one single card that would make my sister start collecting.  Corey Haim.  Nice.  I got two of these....not so nice.

In total, I pulled 13 Mega Memorabilia cards, so about one per box. 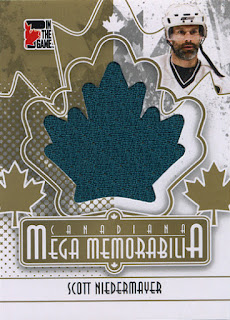 14 if you count this gold version Scott Niedermayer out of 10.  Anybody know where the green jersey piece comes from?

If there was one gold to hit.....I like that it was a hockey player. 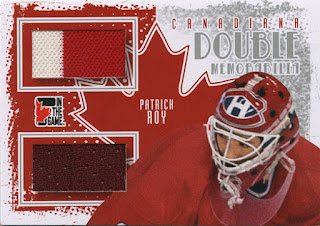 From single to double.  There's more goodies in these boxes.

Double memorabilia cards are set to 90 copies each and feature some cards with just one person with two pieces of jersey... 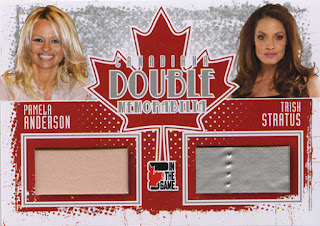 ...or two people with a piece of memorabilia for each.

Yes...more Pam.  And some Trish too.  Not bad.  I pulled 5 Double Memorabilia pieces in total.

Almost done guys.  Hope you're having fun learning about Canada. 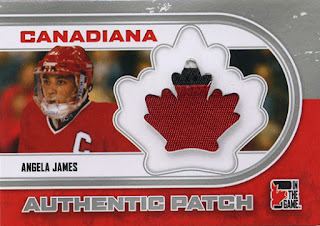 These Authentic Patch cards are really nice.  The swatch size is smaller, but the piece is of higher quality.

I like this Angela James piece a lot but must confess that out of the other 10 boxes I opened, there were two....Larry Walker and a short print Steve Yzerman.  Sweet.

That gets us to the final card of the break.  And yes.....it's Pamela Anderson. 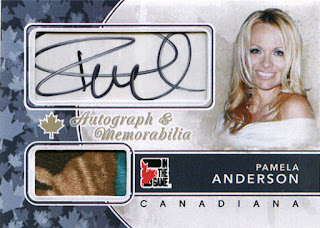 These Autograph & Memorabilia pieces are limited to 35 and are a tough pull.  There was one in my 10-box half case and one in the other half.

It's not a sticker auto but I can't consider it hard signed either.  It looks like a card was signed and inserted into the card cut.  ITG has used this technique many times before and is a nice balance for those who can't sign the actual card for whatever reason.

Well, that's that.  Was the 15 box break worth it?  Absolutely.  Will I get my money back?  Maybe not.  But boy was it ever fun to bust the boxes open. I like the base set and autos so much that I might build the sets myself now.  Further to that, this might be an excellent product to build with my 11-year-old nephew.  We can both learn a little bit about Canada's history (and Pam Anderson) and have fun completing a set together.
Posted by bamlinden at 10:41 PM

Labels: Box Break, Outside The Box