There's a saying that when it rains, it pours.  The past month has been giving me that feeling.  Today I picked up not one, but two cards from the post office.  Cards that definitely fit the bill of jumbo.

You may remember just a couple weeks ago that I picked up this gem of a card (thanks to some great help at the Toronto Expo).  It was a card that I didn't think would ever hit my collection...let alone see the light of day.

And wouldn't you know it, not two days later, the silver version of the card (limited to just 4 copies) pops up on ebay.  The first one of its kind I've seen since the product came out.

At first I was going to pass on it.  After all, I had just landed the gold 1/1, and I knew there were a couple other biggies about to hit the mailbox.  I figured I'd let somebody else throw bids at it.

Then I learned that another Linden collector already had his copy.  That means just 3 are left.  It was a little last minute, but I decided to go for it. 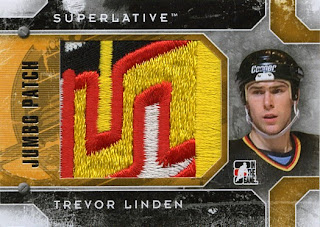 The patch is actually a little nicer in my opinion than it's 1/1 gold counterpart.  And I think that if I pieced them together they would spell the "K" and "S" from "Canucks".  The only thing that differentiates this silver version from the gold....the foil on the "Jumbo Patch" words are silver on one and gold on the other.  Woo hoo.

That leaves me just 5 cards away from landing the 20-card "rainbow" from Superlative III.  Granted, four of them are 1/1's and two of those are in another person's collection.....but I'm close.


So what was in the other bubble mailer? 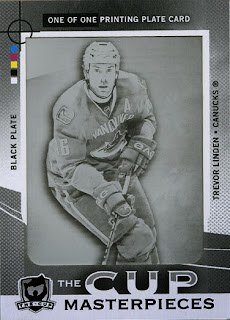 Oh....not much.  This was another card that I flip flopped over.  Printing plates don't normally command a lot of dough (this one was a healthy amount, but not ridiculous) and it is a 1/1.  At the end of the day - I caved.

But at least I caved with something for my Linden collection.  Normally my cavings consist of box breaks that sit in my trade box for way too long.

This Linden (as with all of them) will get the red carpet treatment.
Posted by bamlinden at 10:48 PM