A gorgeous weekend (finally) in the city was an added bonus to a very successful card show.  The second last show of the season and I was very happy to see a couple new tables set up.

It's always fun to see new stuff strewn out on tables.  Even if I'm not buying, I can do some serious window shopping.  In this case....it was a bit of trading that landed me three new cards for my HHOF Auto project. 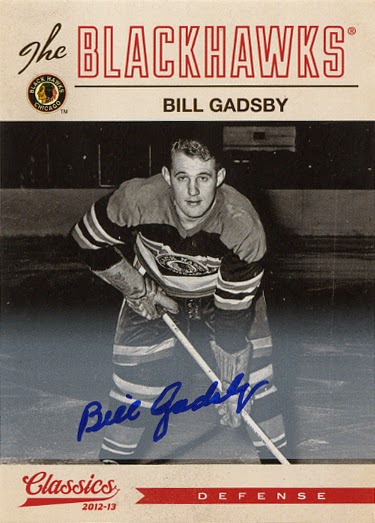 This was a nice add to the collection.  One of the new tables set up had a few of these Panini Classics Signature cards.  Gadsby was the first card I saw that had me sifting through the list.

He was building the set and saw that I had an extra Linden in with my traders.  A simple and solid trade.

Once I got home I noticed that the card seems to be a bit off in the printing.  The white gradient where the signature sits seems to not blend properly at the bottom leaving what looks like an unfinished stripe.

I took a look at other Gadsby cards on ebay and it seems my copy is a bit of an anomaly.  Too bad....it's all I see now when looking at it.  Maybe down the road I'll trade for an upgrade.  Until then, it's another hard signed Hall of Famer. 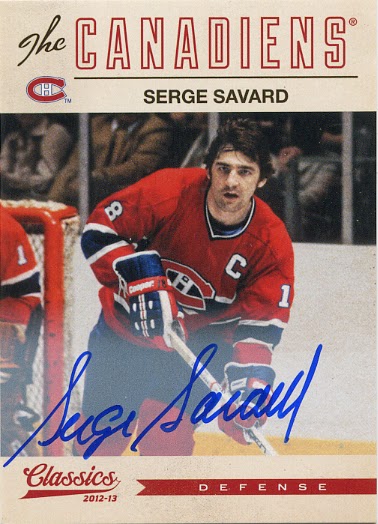 I love the photo on this card.  And the autograph looks just as sharp.  This card didn't have as much weight to it in terms of what I had to give up.  An additional bonus.

Cards from this era of the HHOF list are the most fun for me.  They feature guys that I would have seen play as I was introduced to the game of hockey and the stars of the NHL.  And while it was the Islanders and Oilers of the 80's that really stood out for me, the Canadiens teams of the 70's are without a doubt the most impressive of them all. 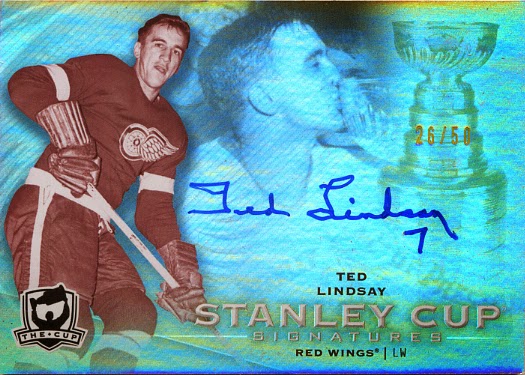 This card came from a different table where I wasn't sure if a trade would even be possible.  He had a Johnny Bower as well but wasn't really looking to trade it.  Fair enough.  I'm glad we were able to work out a deal on the Lindsay.

Ted Lindsay is a player who's name is memorable not just for what he did on the ice, but for the sacrifices and efforts he made off it.  One of the leaders in the movement to bring a players union into the game - and in effect, the NHLPA, Lindsay saw that the owners were getting just a little too much of the money pie for his liking.

How much of his career was compromised or sacrificed as a result of his efforts?  Who knows.  But he earned the respect of a lot of his fellow peers.....and many in the generations who followed.

With these three cards, I'm already a third of the way to my goal.  And quite honestly....I haven't even really tried hard.  I can't wait for the next trade night coming up this week.  I'm hoping to add a few more cards to the mix.