Another month, another new hockey product.

I'm a little torn on the latest hockey product to be released by Upper Deck.  Trilogy has created a template (like many of its other sets) that seems to work for box breakers, set builders and player collectors.  And it seems as though UD has stuck to its guns with what it knows.

When I first saw the Linden cards I'd be chasing in the product this year, I thought for sure I was looking at last year's checklist.  Four cards in total, just like the 13/14 release.

The parallels on the pucks are near identical as well.  There's the regular auto, the NHL Shield logo (/3) and the Retro logo (/15).  Last year, the Retro logo was out of /13.  That's the only difference.

While I'm happy with the reasonable chase (four cards as opposed to the 20 or so put out in other products), the familiarity from one season to the next has left me a little ho-hum.

I'll admit though, things changed a bit last week at trade night when this card popped up. 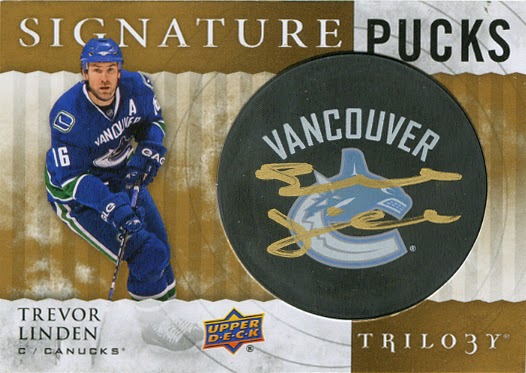 The shop owners were busting a case of the product and when I caught wind of this I knew I'd be keeping a close eye and an open ear for the "Hey....Linden guy" yelp.

Sure enough, there was one.....for this card.

And it was a super-smooth transaction.  I had a dollar price in mind and when they told me their price, we were right on the money.  Gotta love that.

I'm thrilled to include this card to the collection.  Mostly because I was able to add it locally and for what I consider to be a very fair price.  It sometimes gets tough to acquire new Linden cards when everybody and their dog knows that I collect him.  There are times when the "Linden Tax" gets added to the price, but in this instance that was not the case.

One more off the wantlist.  And I guess I'm looking forward to next year's Trilogy where I'll be adding four more to it.
Posted by bamlinden at 7:15 AM