I was going through some of my old base cards that have just been taking up space in my closet. Organizing and eventually getting rid of most of them. I plan on keeping some for my 'One Sheet, One Set' project, my goalie mask collection as well as plucking the odd 'Bike Spoke' card.

One of the other sets that I've been kind of keeping an eye out for is my 'Raise The Cup' project. Cards where players are hoisting the cup over their heads. Capturing that pinnacle moment in a player's career.

I came one card that I knew I needed a reason to exclude from the set. 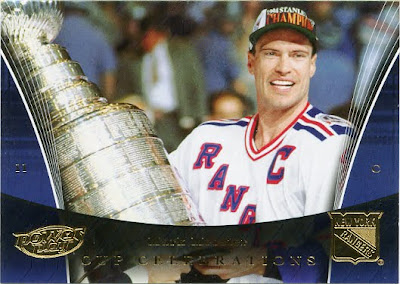 MESSIER!!!! How I hate this guy. Messier and coach Mike Keenan both were the reasons why my favorite player was traded from the Canucks in a terrible move by the club (granted, they got Bertuzzi and McCabe in the process....but still).

Before that though, they were the main players in the New York Rangers ending their long curse for the cup. One game away from Trevor Linden leading the Canucks to the promise land. It still stings to think about it.

Now looking at the card, Messier isn't raising the cup over his head. It doesn't have the same feel as the other cards in my collection. So with that, after serious deliberation, I have decided that it will not be included in my 'Raise The Cup' collection. (he, he, he). 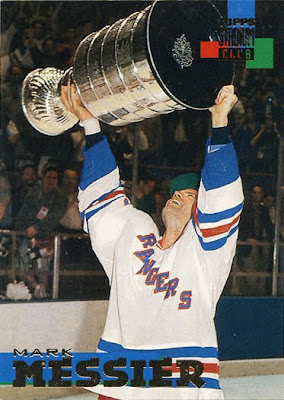 Did I mention that I hate Messier. 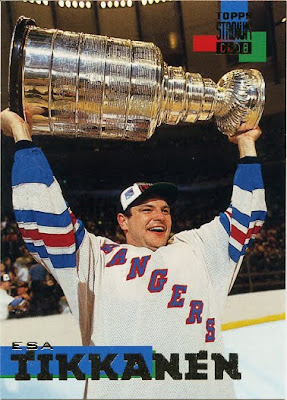 I hate his teammates too. 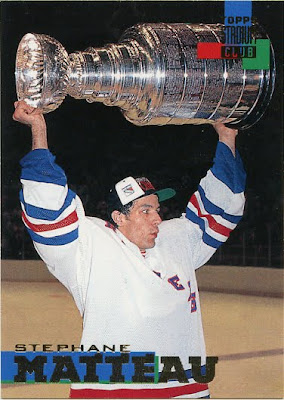 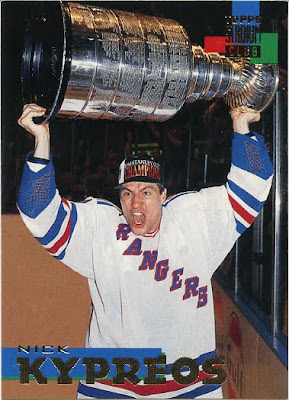 Especially this guy. I can't believe Nick Kypreos has a Stanley Cup ring. This card needs to be put through the bike spokes for sure. I mean look at his mug. That's just wrong.

1994/95 Topps Stadium Club....I hate you as a set. The New York Rangers 'love in' is just wrong. To make matters worse, there were a half-dozen other Rangers cards that had players holding the cup, drinking from the cup, posing with the cup.