In The Game Ultimate 10.

If ever there was a love/hate relationship this would be it.

I love the fact that Trevor Linden is being incorporated into ITG's sets. I hate that it's going to cost me an arm and a leg to chase them.

I love the designs despite the complete inability to use NHL logos. I hate that it's going to cost me an arm and a leg to chase them.

I love that one of the nicest (if not THE nicest) cards I've ever seen....creating huge discussion and hype amongst hobbyists has been created featuring the Linden name.

I hate that it's going to cost me an arm and a leg to chase them.

It was the first mailday featuring an ITG Ultimate Series 10 card of Trev's. And it did not disappoint. 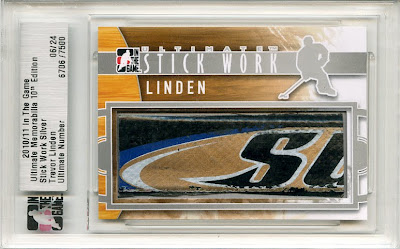 2010/11 In The Game
Ultimate Memorabilia 10th Edition
Stick Work Silver /24
I've already seen a half dozen or so cards pop up from this set (a quarter of them) within the first 3 weeks of release. To me that says 2 things. There's been a lot of the product cracked and a lot of people feel that Linden stuff can fetch a pretty dime.

Out of the Stick Work cards I've seen so far, this one is one of the nicest. The shapes, colors and the font used on the 'S' really make this a card that stands out.

The only downside to the card is that being an ITG Ultimate card, it is encased in a protective slab. Good to know that the card hasn't been tampered with. Bad that I can't touch the card without destroying the case.

I can live with that though.

As a side note....you will want to tune in over the next few days as I reveal the Linden Card Of The Year (and it is a mindblower)!
Posted by bamlinden at 11:03 PM