LINDEN CARD OF THE YEAR!!!

There have been many cards (some of which I have featured on this blog) that I consider top cards in my collection. Patch cards, autographed cards, rare cards and even a couple 1/1's.

But none of the cards in my collection have acquired the moniker of 'Centerpiece'.

This card is one that I have drooled over since I first saw the mock-up of it a few months ago. The buzz that the card created was unlike any I have ever seen for a Linden card.

I anticipated the release of the product earlier this month and was looking forward to seeing who would pull this gem of a card.

Seeing that it was not only pulled, but up for grabs made me seriously consider what kind of dollar sign I would associate with the card.

In the end, I decided to go for it. A once in a lifetime opportunity that I wouldn't let slip by.

So without further ado - I present to you the Trevor Linden Card Of The Year! 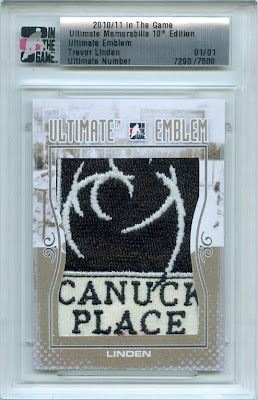 2010/11 In The Game
Ultimate Memorabilia 10th Edition
Ultimate Emblem 1/1
Yup. I did it! I ponied up the dough and landed what is without question the highlight of my Trevor Linden collection.

And for those who might have that ounce of doubt...here is the card in my grubby little hands. 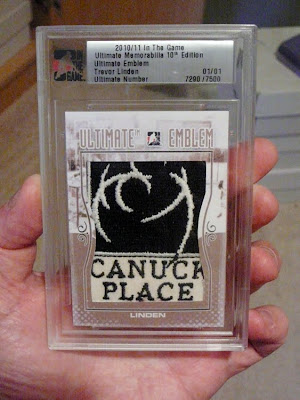 Nice! My only beef (again) is that I can't physically touch the card. Not a problem though as I would prefer this card stay in as pristine condition as possible.

And for those who are wondering....buyer's remorse? Not an ounce of it. I am thrilled to get the card and although it cost me way more than I have ever paid for a Linden card - I am happy I did it.