Well, it was an exciting night at the LCS yesterday. I was contemplating all night whether or not to buy a box of Panini Dominion. My brain said no, but my heart said yes. My wallet said no, but my VISA said yes. 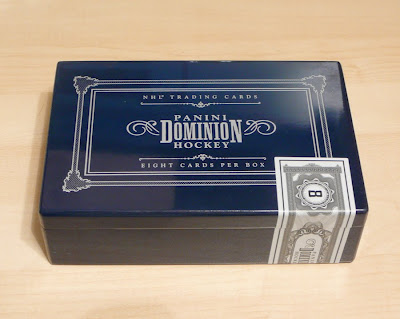 And it literally is a box. I've never opened one of these products before. No 'ripping' or 'tearing' here.

I was very careful in slicing open the stickers to open the box. 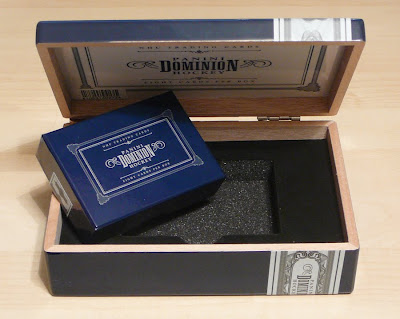 I need to get me some of these foamy things and some empty unmarked boxes. Would make the perfect giftcase for my customs.

Now if you noticed on the small box that the cards came in, it says EIGHT cards per box.

Well, my math skills tells me that I got TEN. That's better than eight.

I also noticed there is no age restrictions on the packaging. So all you six and seven-year-olds that have been stymied by all the other Panini products - c'mon in!

The base cards are pretty nice. It's a 150-card base set and they are numbered to /199. To most, these would be considered the 'throwaways'. 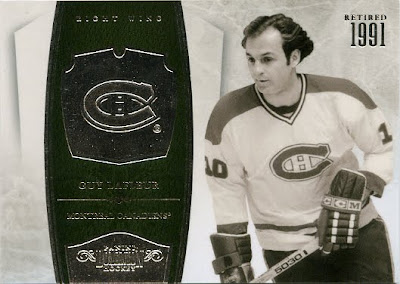 There are also the Legends base cards, a 50-card set numbered to /99. This is the set Trev's in. I got Guy. Habs fans, notice a trend? 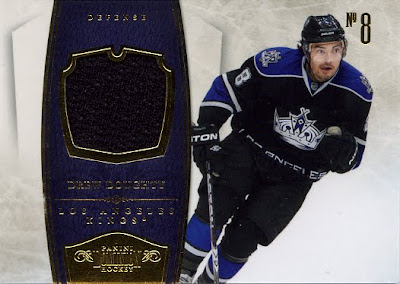 The jersey parallel. Dominion is a parallel nightmare for player collectors (I'm just happy there are no jersey cards of Linden amidst the 19 Linden cards in this product). 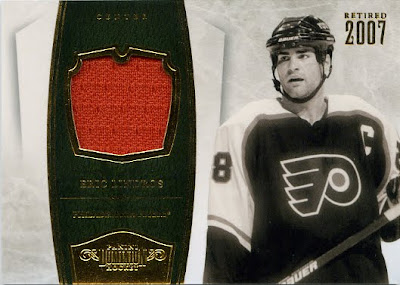 Lindros! Not bad. Is it me or is there a bit of a resurgence in his stuff this past year. He's sort of hanging with Linden in that regards. 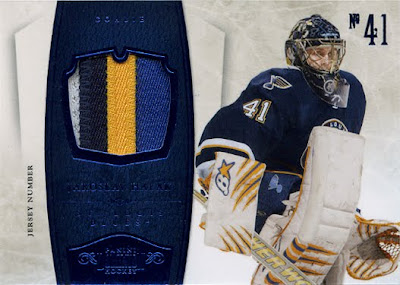 This Halak patch is a jersey number parallel numbered /25. A really nice patch if I do say so myself. Hopefully it will equal some good trading. 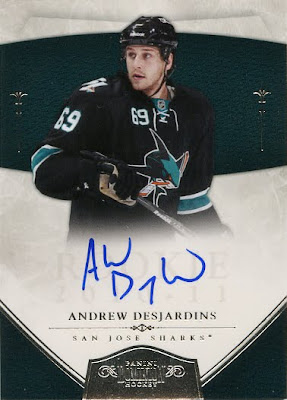 Here's a rookie auto /199. It's hard signed....or should I say it looked like the player had a hard time signing. What a terrible scribble. 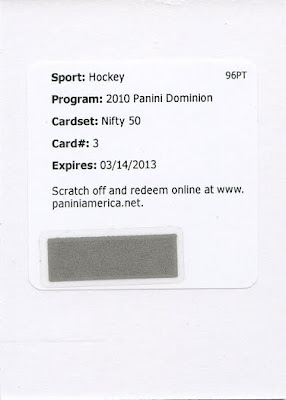 Doh! A redemption card. Panini tried its best to minimize the number of redemption cards in this product, but I can understand that it's tough to be 100% when relying on so many players.

This 'Nifty 50' autograph is of Dino Ciccarelli and celebrates him being a 50-goal scorer. Numbered /50. 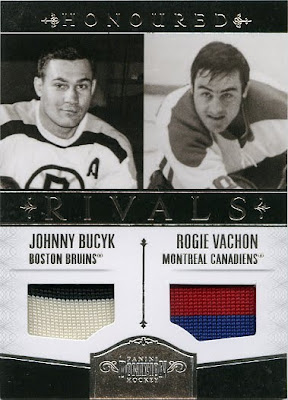 Rogie!!!!!! This Honoured Rivals card has a pair of great legends attached to it.

Rogie Vachon is such an underrated goalie and his masks were some of my favorite. Equally underrated is Johnny Bucyk. It's a shame these guys don't get the hobby love like so many others.

Numbered to /49, this card is one of the better pulls in the box. 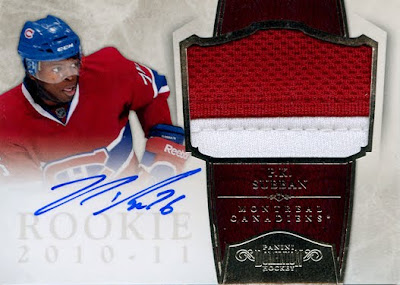 But it's not as nice as this one! When I first saw it, I didn't realize what I had. A quick peek on ebay to see some of the prices this card has gone for made the smile real wide on my face.

Now, I was told at the card store that the Subban memorabilia piece should be a patch and that what I had was the seam of a jersey and that I should contact Panini to get a replacement.

Geez, do I try to upgrade the card and send it off, or do I keep it, sell it (or trade it) and make a nice little profit?

Overall, I can't really complain about this box break....other than the lack of Lindens. But maybe I can parlay some of these into some of those.
Posted by bamlinden at 11:33 PM