OK, I picked them up at the antique show last weekend. But there are some odd pieces of cardboard in the mix, and some really nice jewels as well.

I had my vintage cards hat on since a lot of the items there were.....old(er). But it was the oddball pickups that really stole the show.

I'll start with my favorite though. This card always catches my eye whenever I see one and I couldn't resist picking this copy up. 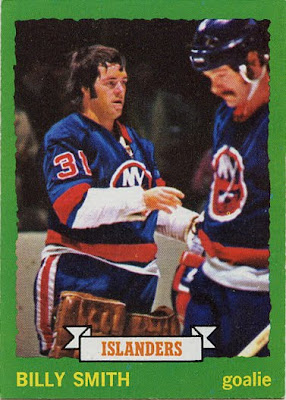 1973/74 Topps
#162 Billy Smith RC
This card has really held its shape for being almost 40 years old. The gloss on the front is still there, the good ol' OPC 'card curve' is there, the centering is above average and the corners are really strong.

And this was a year where cards had a terrible time keeping their condition.

But what I really love about this card (other than the fact it's a rookie card of one of my fave goailes as a kid) is the photo.

The leather goalie pads, the 70's sideburns and the fact it looks like Billy just finished scrapping with someone. I much prefer this shot to a warmup pose or even some lame game action.

And I'm very happy to see him not in front of the aqua blue wall looking stoic. 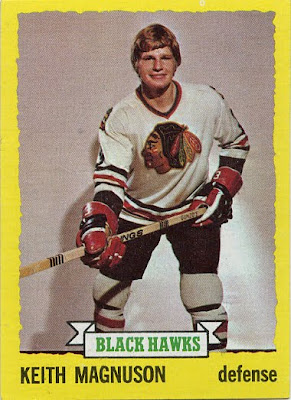 1973/74 Topps
#44 Keith Magnuson
I love the Topps cards from this year because instead of the red and green colors in the OPC verisions, they have yellow and blue to go along with the green.

This Magnuson card is in the same sort of condition as the Smith and the name just made me want to include it in my collection.

It was one of a dozen or so cards from this year that I picked up and will make it into my 'One Sheet, One Set' project. I also picked up some older Topps too. Stay tuned.

But like I said, it was the oddball stuff that took the crown. The Kings' crown in fact. 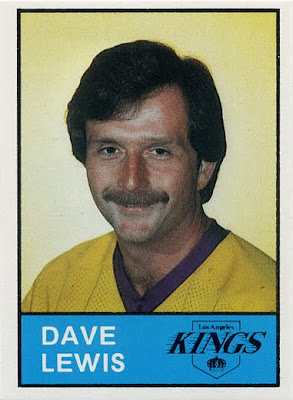 1980 Los Angeles Kings
Team Set (14 cards)
These look so ugly, they're awesome. Only a guy who loves the 'Flying V' Canucks jersey of the 70's would find this set attractive I guess.

I had never seen this set before. But from what I was told by the seller, it was a one game, in arena promotion. Only 5000 sets were produced and handed out at a game back in 1980.

Who knows what the true production run was (there's little info on these I could find) or how many of the sets were thrown away by fans who really didn't care about the cards.

Nonetheless, this set found its way to the show.....and me. 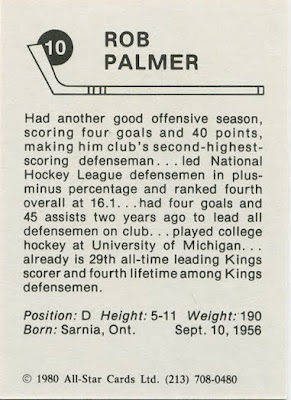 Yup, the back of the cards are just as ugly as the front. No dialing of the number now.....I'm sure you won't get All-Star Cards Ltd.

But what I love even more (and was the biggest reason for my interest) was the inclusion of all three members of the Triple Crown Line. Marcel Dionne was hands down one of the most underrated players ever. He was so good, but never truly got the credit he deserved.

It's tough when you play in a Los Angeles market that just didn't care for hockey back then. Oh, and then there's the fact that a kid named Gretzky is stealing literally all the thunder.

Charlie Simmer and Dave Taylor are no slouches as well. I like Simmer and enjoy his color commentary on the Calgary Flames broadcasts here in town.

He was recently honored by the Kings for his contribution to the team and when they spewed off some of his stats, I was quite amazed.

For a couple years in the late 70's, early 80's, he was one of the most dominant players in the league. 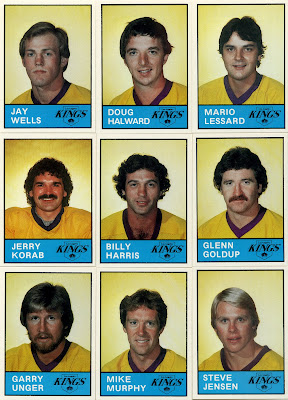 Here are the rest of the cards in the set. These are in pristine condition. White backs. Crisp, glossy fronts. Sharp, sharp corners.

I had to have them.

The little gerbil in my head started spinning the wheel. How do I do this? I started bundling all the stuff I was hoping to get, threw together a number that I thought was low, but fair and fired away. I wanted to find that line.

In the end, for everything.....I paid $35. And it was just the right amount. He countered with $40, but I held solid. He gave in and the goodies were on their way home.

Now to figure out what to do with them all.

Antique shows are awesome. Especially when they have hockey card tables.
Posted by bamlinden at 8:04 PM