LINDEN CARD OF THE WEEK - No Joke

Well, I was able to get a few of you to bite on my April Fools post.  I even had a couple of family members convinced of the story as well.

But within the post sits a bit of truth.  And I couldn't be happier about it.

It all goes back to that Dominion Quad auto featuring Lemieux, Sakic, Yzerman and my guy Trev.

There are only 5 copies in existence, and when Panini released an image of it to promote their product back in August, I was both thrilled and disappointed.  For the first time since starting my Linden collection, I really felt that there was a card outside the range of possibility for me to snag.

After all, with only 5 copies (and 4 highly desirable and collectible players on the front) I thought the bidding would be ruthless once they hit the open market.  And sure enough, I was right.

So 3 out of the 5 copies were in the hands of collectors who (in all probability) would never look to let go of it.

I had a chance to make a cash+trade deal for one in November, but I took too long to make up my mind and the seller opted out of the deal.  At the time I saw it as my missed opportunity.  But now, I see it as a fortunate bounce.

A couple of weeks ago, the fourth copy of the card hit ebay.  It had a Buy It Now price that was lower than any of the other cards had sold for and it also had a Best Offer option.

I was kind of dumbfounded and trying to figure out what to do.  I could snag the card right then and there and be thrilled to get it at a decent price.  Instead, I sent him an offer - not a lowball offer, but an offer that I surely thought he would counter.  I wanted to see where he sat on his price.

A couple of days went by and I heard nothing.  I thought for sure that I had insulted the seller with my low offer.  Then, on the third day, I saw an e-mail from ebay saying "Congratulations....you have won....".

I couldn't believe it!  He accepted my offer.

The card arrived on Friday, and I picked it up on Saturday. 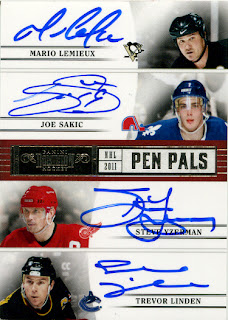 Yeah.  To say that this is a huge pickup would be an understatement.  This card reinforces my thoughts that I had back in the fall.  I may not get every Linden, but I want to pursue them.  Hold off if the price isn't right and when the time comes - go for it.  If it isn't meant to be....then so be it.  Have fun and don't let the market dictate what this collection becomes to me.

This card definitely ranks right up there as one of the top pickups in my collection.  4 hard-signed autos of 4 of the greatest captains of my generation.  That means all 4 of these guys held this card in their hands at some point. 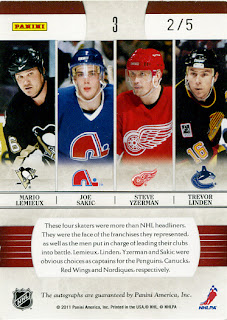 Here's the back.  Just to show that side of the card off.

And just to eliminate any doubt that this is legit, I thought I'd share this card with one of my new favorites... 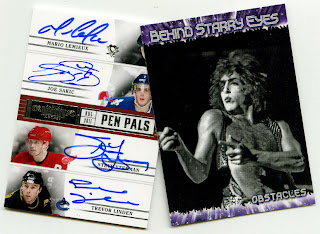