LINDEN CARD OF THE WEEK - This One's Got Teeth!

It's the last day of April.  Do you know what that means (other than making sure you got your taxes filed)?

The year is already a third of the way done.  Gak!

It's been a busy 4 months for me.  In addition to work, my niece's softball and my nephew's lacrosse, I've been more active pursuing Linden cards for my collection than I have been in years.  And while it's been a lot of fun, I am hoping the summer months can offer a bit of a reprieve as my wallet is shedding a few tears.

I know there are going to be a few more cards of his in the next bit.  Panini Elite has already shown off one of the nicer autos I've seen in a while and In The Game has Trev in their expo redemption products.  One card (a dual memorabilia card with Ken Griffey Jr.) has me interested to see the demand for this unique item.

But this post is going to focus on (yet another) Linden mailday.

I saw this card pop up on ebay and my first thought was "This must be the Gold 1/1 patch".  There haven't been too many Linden patches that I've seen as nice as this one. 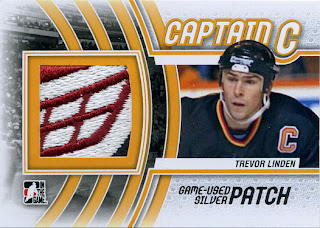 When I say this card has teeth.....I mean it.  I don't think I've ever seen a Linden patch card with this kind of design on it.  And of course, the asking price was reflective of that fact.

While I didn't pay the full asking price, I felt the actual purchase price was fair, but a little more than I was hoping to pay for one.  But what can you do.

My only beef about the card is that the patch swatch comes from a jersey type not depicted in the photo.  A minor detail, but something I think could have been avoided.

This leaves me with just a few more cards to obtain to finish the Captain-C portion of my Linden collection.  I'm in no real rush to land the rest.  There are a couple of cards I should be able to land for less than $10 but there are a couple that might be a little tougher.  I keep telling myself "It's not a race"......once in a while, I listen.

Hopefully over the next couple weeks, I can get to a few more posts.  But with the summer months around the corner, things might be slowing down a little while work (and golf season) ramp up a bit.