It was a good week for Lindens.  I ended up finding five new additions to the collection - and in a couple cases...actually managed to trade for them.

I also showed some good patience in acquiring a couple of these.  Something that has bitten me in the butt a few times in the past.

With all the new releases and the wantlist growing...or should I say ballooning, I'm finding a new found level of patience.  It's not that I'm losing interest or am not motivated to pick cards up, I'm just not able to financially keep up with the pace of cards being flashed in my face.

Anyways, on to the haul. 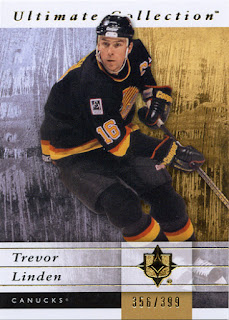 I've seen dozens of these on ebay, but refuse to pay double or triple the cost to have it shipped than what I'm willing to spend on the card itself.  It was just a matter of time before a copy popped up at a show locally.  Today was that day. 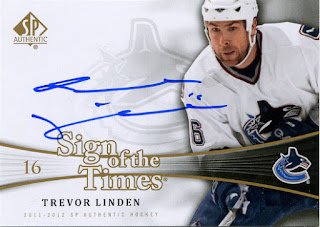 Now I've had a copy of this card in my collection for a while now, but I've never showed it off.  It's a fantastic looking card and a great design for an auto set.  The hard signed signatures just finish it off perfectly.

And.....the cards are very reasonably priced.  People looking for a good auto set might want to consider this one.

This is the fourth....yup, fourth copy of this card I've picked up.  The one in my collection, a couple that have gone out to other Linden collectors and now this copy. 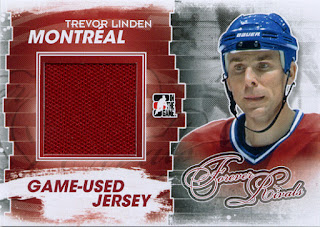 Another card picked up in a trade today (from the same person that I got the 1 vs. 100 card from).  It's great when guys keep cards aside knowing that I collect a certain player.  The only downside is that there's the potential for price gouging.  Not the case here.  Fair and honest - love it!

And this marks a very important card in my collection.  Can you guess what it is?

That's right.  It's the very first memorabilia piece I've acquired that features a Montreal sweater.  Exciting.  I'm sure it will be the start of many to come. 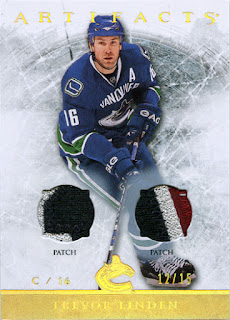 Here's a low numbered item for you all (you knew it was coming right?).  I saw this pop up on ebay from a seller I've purchased from in the past.  He had a 'best offer' option and so I threw him a number....fully expecting to get a counter-offer.

To my surprise, he took the initial bid.  I've seen a couple other copies of this card go for higher than my copy.  That makes me a very happy camper.

Only 11 more copies to go (and I think they've all shown up at one time or another on ebay).  But I'm a patient man.

A little pro-active messaging and some good old fashioned trade haggling had me happy to land this copy.

At the most recent trade night, I knew a guy would be there who cracks a lot of The Cup.  I asked him ahead of time if he had any Lindens.  "Just one" he replied.

I was excited to see this one pop out of the trade box that night.  Granted, it's not the most exciting of patches, but when you have the opportunity to trade for a card like this - you don't get picky.

I gave up a little more than I wanted to, but I knew I had very little in the trade box he'd be interested in.  Add to the fact that the card I passed over to him has been in there for a year now.  I thought "Why not", it's not everyday you get to trade for a card like this.

Hard signed, a three colored patch, numbered to just 50 and not a penny out of my pocket.  That's a good deal in my books.