Have you ever sent off an autograph request through the mail?  When you got your card back have you ever questioned the authenticity of your signature?

With the onslaught of requests (that a player just would not be able to keep up with) some atheletes have resorted to using an autopen.  What is an autopen you ask?  It's a machine used for the automatic signing of a signature.  After a metal template (or matrix as its called) is loaded into the machine, the autopen then writes the signature out in pen.  It's the signature of the player, but it's not the actual player sitting down and doing the signing for each item. 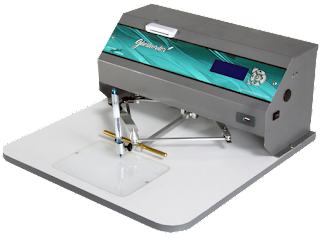 Many athletes have adopted the autopen.  Nolan Ryan, Muhammed Ali and Wayne Gretzky to name just a few.

Here's a quick article showing a couple of Gretzky's autos superimposed.  You can see the exactness of the signatures.  No question it was done with an autopen - nobody can duplicate their signature so exactly.

Note the "start/stop" ink buildups.  A clear sign of an autopen.

Now while I would be a little disappointed receiving an autopen signature show up in the mail, I can kind of understand the need for it.  Would I rather have that than potentially nothing?  I guess.  The sheer volume of requests would put me so far back in line I might never see the item come back.

But that's for through the mail requests.  Something where I send something out in hopes........I repeat IN HOPES of getting something in return.

Now what if you found something of sort in your pack of hockey cards?

Well, there's a really interesting debate going on about the authenticity of an athlete's signature as it appears in multiple products this season.  It appears that the signature was not done, individually...by hand, by the player himself.

Take a look at these signatures...

That's the signature belonging to Anaheim Ducks rising star Devante Smith-Pelly.  While the signatures do have a feeling of variation, the similarities of them are very - very telling.

Some feel that the use of a stamp of some sort is being used.  This would explain the differences in pen pressure and the odd ink spot.

In this instance, it looks like the stamp slipped which has left a thicker auto (but is still consistent with the above examples).

Somebody even took the time to note some of the areas that are most consistent from signature to signature on cards from the various products.

After seeing this, take a look at the signatures above.

They all have it - undeniable.

Now can a player have this consistent a signature?  No.  I just signed my names 10 times and while I think I have a pretty consistent autograph, there is no question that the nuances in my sig vary - a lot.

For a player to have this consistent a signature - even if they are taking their time.....but remember, they are signing thousands of hockey cards for card companies - is impossible.  But I'm no handwriting expert.

Now if I bought a pack of hockey cards with Devante's signature in it would I be excited?  Not anymore.  The immediate question of authenticity comes into play.  I wouldn't know if Smith-Pelly held the card at all (or if it was just an assistant or friend applying the stamp.

Now, nothing has been confirmed, this is all speculation at this point, but the evidence is growing.  Upper Deck has not commented on this matter yet, but if it is proven that a stamp was used, I would be pretty ticked as a company.  They pay good money for these athletes signatures, the least they could do is sign the cards themselves.

What was also mentioned (and I find very interesting) is that DSP's auto card was pulled from this year's Dominion release.  Panini has yet to specify why, but wouldn't it be interesting if this were the reason.  His cards were removed from the product very late in the production process as Panini did not replace his card slot with another player.

At the end of the day, I think that if a player has committed to signing for a particular card company, they should honor that contract by signing the cards themselves - plain and simple.  By implementing something like a stamp or autopen, you are essentially telling your fans - the people who buy these cards - that they are worth the time or effort.

I'll be keeping my eye on this story - it's the first of its kind I've heard about and might be a fork in the hobby card road.  Where will things go from here?
Posted by bamlinden at 4:41 PM