This opinion has come about because of one of the most "up and down" days of collecting I've had in a very long time.

A couple weeks ago came across an ebay auction for a card that has been on my wantlist for almost 10 years.  It was bundled in with 5 other cards but I didn't care....I was going to land this elusive piece of cardboard.

The auction came and went and I won...ending up paying less for the lot of 6 than I would have gladly plunked down just for the single Linden card.  I couldn't get the payment sent off to the seller fast enough.

There have been few cards over the past 2-3 years that has garnered this much excitement in me.  What's the card you ask? 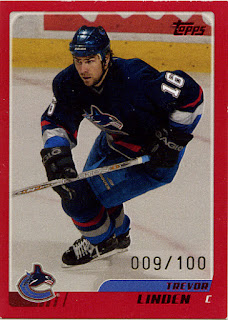 Sadly, the card got the last laugh. 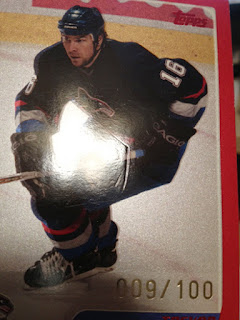 This kind of damage isn't something that happens in shipping, even with the (in my opinion) less than adequate shipping practices.  This is something that I would bet good money has been sitting on the card for a while.

NrMt, Mint, Gem, Pristine, Poor, "chipped corners", "dinged corners", creased, the list goes on.  These are industry terms that are used all the time to illustrate the condition of any given card.  They are used for a reason.

Looking back at the auction, I should have noticed that nowhere in the description did it state the condition of the cards.  The Linden wasn't the only one that would be deemed substandard.

That just pisses me off.

So I sat down in front of the computer and wrote a stern but fair e-mail to the seller.  I expressed my frustration that the cards were packaged in the manner they were and that the Linden especially was damaged.

Needless to say - they are all going back.  And I'm expecting the seller to foot the bill for the return shipping.

Examining the card you are about to sell and communicating any potential issue areas is just common courtesy.  It's also something I will no longer take for granted when I see a lack thereof the next time an auction of interest shows up.

Just terrible.
Posted by bamlinden at 12:20 AM