I'm very happy with how January's book went.  I didn't feel rushed to finish it, I found some good quality time to read (and even got my nephew involved) and most importantly....I really enjoyed the book.

For those of you not in the know - I'm reading a book a month this year.  Sports books, biographies, whatever piques my interest.

This month it was a read that was lent to me by a co-worker way back last spring.  Yeah, I need a set-up like this to get things done.  And so I did. 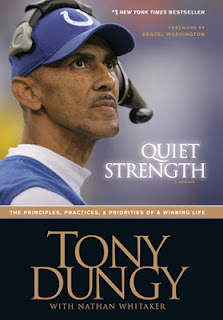 Now I'm not going to go into the big long rambles that my '30 in 30' project  resulted in.  I'm keeping these reviews short and sweet.

For those of you who don't know, Tony Dungy was the coach of the Indianapolis Colts and led the team to the Super Bowl in 2007.  He was also the catylist for the turnaround in Tampa Bay, taking the Bucs from the league laughing stock to serious contender.  Quiet Strength really showcases the person Tony Dungy is both on and off the field.  If you want to read a good, compelling story that doesn't have any of the negative vibes of scandal or controversy - this is your book.

He was never the best football player on his team....but he was always one of the best team players.  He had a vision for how he wanted to do things as a coach....and he succeeded because he stayed the course.  He took inspiration from those he admired and respected and in turn became a person who many found to be a tremendous role model.

He is a very private person and has a very deep faith.  These tones are throughout the book and gives the reader insight to his decisions throughout his NFL career as well as his personal life.

He has had to deal with some very difficult times and he is pretty open and candid in this book.  As a person who doesn't do many interviews, he really peels the layers back and reveals that which is most important to him.

This is a very easy read and I found myself hearing Tony's voice in the words.  The only downside to this book is that it ends after his retirement from NFL coaching.  The book does not dip into his involvement with NBC's Sunday Night Football.  A very minor downside if you ask me. 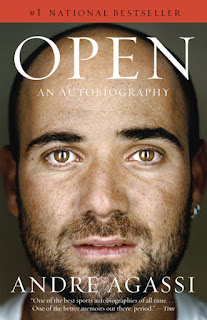