Yes, I realize that I just posted a Linden pickup yesterday, but tonight was one of those nights you just don't expect.  And the card I came home with is definitely worthy of its own post.

Wednesday was the monthly trade night at the local card store.  I was looking forward to maybe hunting down some cards from the Linden-heavy Ultimate Memorabilia 12th Edition.

When a fellow collector heard I would be heading down for the evening's festivities, he simply stated to me "Might have found just the card for you this week."

Cool.  I thought maybe he had found a base parallel or a sticker auto from Fleer Retro.  Something I need....but not off the charts. 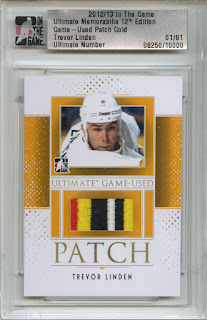 What's better is that rather than punch out a big number, he was looking to trade for it.  I was speechless.

After a quick, effortless few minutes of card hunting, he found a perfectly suitable item and we made the transaction.  I still can't believe it.

What's better is that I got the chance to chat with him for a bit later that evening.  His attitude towards the hobby and his ideals when it comes to hockey card collecting are ones that I am so in tune with.  It was so refreshing to hear somebody speak about enjoying the hobby.  Being realistic in purchasing, trading, and just the overall big picture of collecting.

It was something that I know will stick with me for a good long while.

So thank you very much Rob (Mr7ucky).  Your generosity and frankly just thinking of me when you saw the Linden card means a lot.  I have no doubt that some good karma will be coming your way real soon.