'DID YOU KNOW' - Ron Tugnutt

Congrats to the Columbus Blue Jackets for winning their first ever playoff game last night. It was an exciting game and could make for an interesting series. I thought I'd share a CBJ flavored post to celebrate.


Most of the time when I see a card that fits into the 'Did You Know' subject it's because of an obscure bit of information virtually hidden on the back of a card.  Or maybe it's because the card itself has some meaning that might not be readily known to the masses out there.

But in this instance, the info it clear as day....right on the front of the card.

But I thought that with the regular season now over and the Stanley Cup playoffs in full effect, it would be an appropriate stat.

Take into account the fact that the Columbus Blue Jackets have returned to the dance for just the second time in team history (although they blew it in game one) and the fact that the card itself contains one heck of a sweet mask. 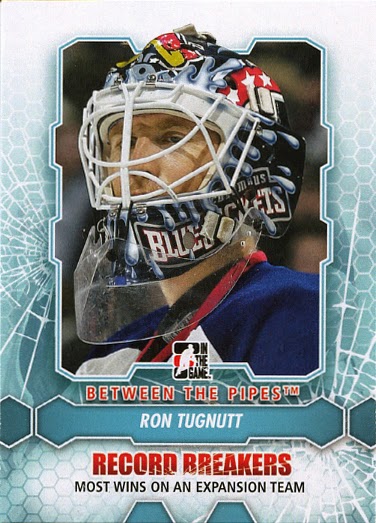 'DID YOU KNOW' - Ron Tugnutt holds the record for most wins by a goalie on an expansion team with 22?

Back in the 2000/01 season, the Columbus Blue Jackets entered the NHL and one of their first free agent signings was Tugnutt (who played for Ottawa and Pittsburgh the previous year).  He appeared in 53 games that season and won 22 times.

He tied the longstanding record on the final game of the season.  Who did he tie?  Minnesota North Stars tender Cesare Maniago (who had 22 wins with the first year team back in the 67/68 season). 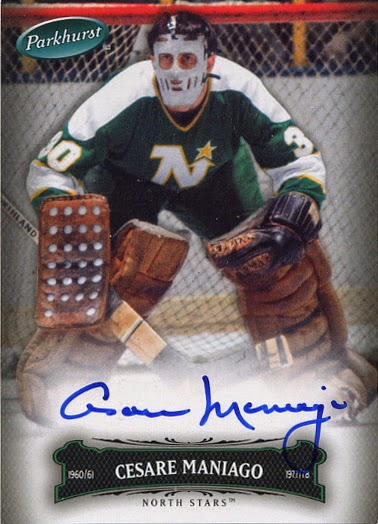 I just had to throw this card in.  Love it.

Anyways, let's go back to Tugger's (or is that Nutt's) mask for a moment.  I love the splash look that covers the front of his lid.  It's something that he incorporated way back in his Montreal days. 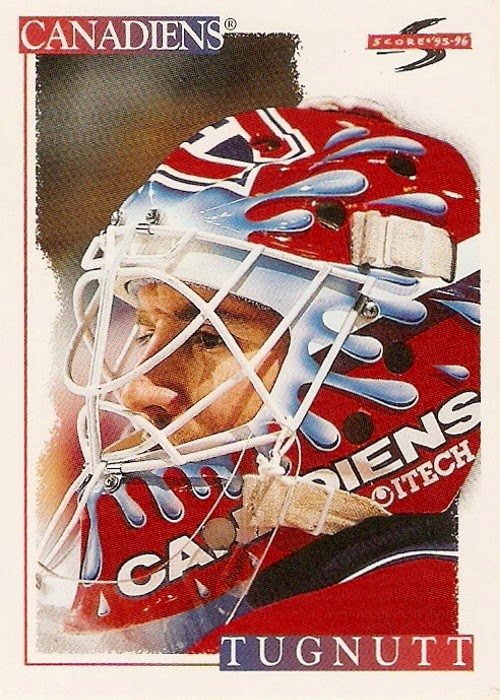 "I was in Montreal and had to make a new mask so I decided a Molson (Canadian beer) splash would be cool.  That is what has given me ideas since.  If you look back to '94, all my masks have a splash effect on them."

Mask painter Frank Cipra has painted many of Ron's mask and has always incorporated this staple Ron Tugnutt look. 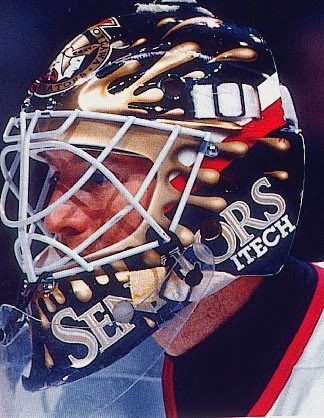 From his days after Montreal when he backstopped Ottawa for three seasons... 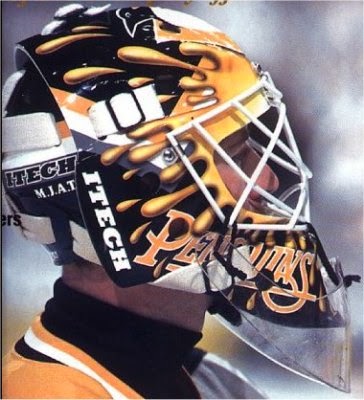 ...to his brief cup of coffee with the Pittsburgh Penguins.  The masks create an instant identity.  The team name along the chin and big splash on the front.

On March 21, 1991 while playing for the Quebec Nordiques, Tugnutt stopped 70 of 73 shots to earn his team a 3-3 tie against the Boston Bruins, the second highest number of saves made in a regular season game in NHL history.  His performance evoked such respect that several Boston Bruins players came over to congratulate Ron after the game ended.

Or how about this one...

Ron Tugnutt was in net for the May 4, 2000 playoff game against the Philadelphis Flyers where he made 70 saves once again.  This time on 72 shots.  The 72nd shot just happened to be Keith Primeau's OT winner (in the fifth extra stanza).  The longest NHL game since the 1930's.

Tungnutt finished his NHL career with 186 wins in 537 games over 16 seasons.  He's more likely to be known for his moments in time as opposed to his overall career.

And his killer mask designs.


Did I just milk this post into a goalie mask love-in or what?
Posted by bamlinden at 12:14 PM

Labels: Behind The Masks, Did You Know