LINDEN CARD OF THE WEEK - The Last Laugh Goes To Me

It's called "the thrill of the chase" for a reason.  This hobby would be incredibly boring if with every new release all the cards you were looking for just popped up, bought or traded for and stored in the collection.

There's something to be said for the rare gems, long odds and tough finds out there.

One such card has been on my wantlist for over a decade.

In the 2003/04 season, there was (what should have been) a very simple O-Pee-Chee release.  Easy to find base card with a trio of numbered parallels.  But to make things more interesting, the company also put out a Topps version of the product....complete with the same trio of parallels.

Now this is the trading card world so a wrench was involved.  Stay with me on this.

So eight cards in total.

Both base versions were easily had as were the blue parallels /500.  I somehow managed to grab the golds /50 before finding either of the reds /100.

I don't know when I tracked down the red OPC parallel but the final piece to the puzzle.....the red "Topps" /100 managed to elude me.

Actually, I did find a copy of the card a few years back.  In fact, I won the ebay auction and had said card in my possession.  But, as I vented about on this blog, condition is king and the seller sent me a dud.

I'm sure you can guess what my "Linden Card Of The Week" is by now so let's take a look. 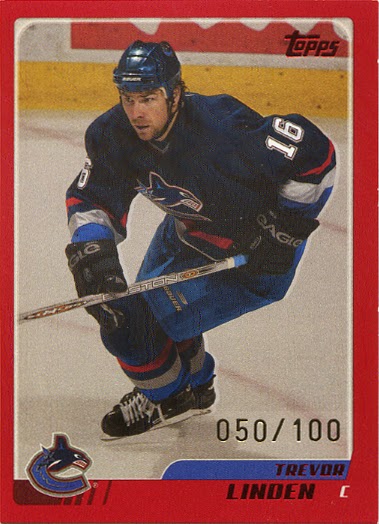 Finally.  The card has been crossed off the list once and for all.

I saw this gem pop up on ebay a few weeks ago and immediately made it my mission to land this copy.  I set a price in my mind that should...SHOULD win the card and sat idle as time ticked down on the auction.  With a few seconds to spare I placed my bid and watched as the price shot up.  It didn't go beyond what I was willing to pay....but it ended for a lot more than I anticipated.

For a card with 100 copies, it went for a very healthy amount.  I'm sure the seller was thrilled (and maybe confused).

When I opened the bubble envelope today I had that sense of accomplishment and completion.  By waiting for the right card and not accepting second best I'm able to put this card in the collection knowing that I'm happy with the copy I have.

And to knock off another card that's high up on the wantlist - a card that's been there for 10+ years is very satisfying.  Landing a copy like this is far more rewarding than any new product release or recent tough pull.