OPINION - What Kind Of Rinky-Dink Operation Is This?

Alright.....I normally don't launch into a big "this sucks" rant when it comes to things.  Or at least I try not to.

But when I saw this card pop up on the open market today.....I just had to share my thoughts - about all of it.

NOTE:  The card scans come from ebay.  I do not own this card.

Leaf Trading Cards has, for the past year or so, taken over the "In The Game" releases, utilizing their name, logo and concepts.  We've seen In The Game Used, Superlative and now (most recently) Stickwork.

I thought the first incarnation of Stickwork was a decent product.  A great concept and some solid execution in certain areas.  But there was definitely room for improvement in my books.

This year, I've been less than impressed with what I've seen from the Linden front.  Your typical double player, triple player, quad player, yadda, yadda, yadda.  Nothing that really makes me go "wow"...... 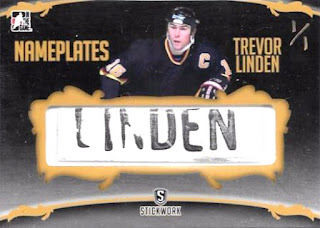 What an ugly card.

This Nameplates piece is currently up on ebay for anyone who wants to shell out the asking price.

I should be super-pumped as it's Trev's first nameplate card that I've seen .  But the number of things (IMO) "wrong"  with this card just turns it into something I can't wait to forget.

I get that Leaf doesn't have an NHL license and are therefore unable to use logos.  But rather than airbrushing out the crest and making it look like Linden is the captain of the practice squad, why not just zoom in a little more on the photo and have the cut window cover where the logo would be?

And "great" cutting job on the stick itself.  Off-center cut on the sides and top makes it looks like a practice job.  And why could they not just extend the stickpiece so that it tucks nicely under the cut window?  I have the huge urge to just pick that Linden sliver right off the card and fling it across the room.

And the overall design concept (or lack thereof)?  What the heck?!!  Who is in charge there?  Player name is off balance with the card itself, "basic" would be an understatement when it comes to the design elements on the front, empty space galore and a gold paint pen 1/1 just to top it off. 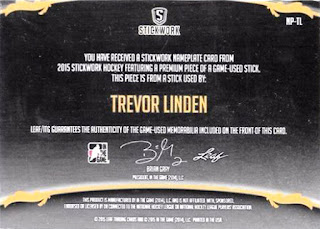 At least the back of the card pairs nicely with the front.....but that's not a good thing.

It's truly disappointing that a card that should generate a ton of excitement (the first of it's kind for this player) gets such a poor effort in design execution.

And to top it off.....and I'm sure I'll never land this card now if the seller reads this....the asking price.

A cool grand - in US dollars of course.

I laughed out loud when I saw that.  A fifth of his asking price might....MIGHT get me to think about it.  But even then, the exchange rate is just brutal for a big ticket card.  And I'm not looking at it from a "lowball" standpoint.  Having collected and paid for hundreds of Linden cards over the years, I'd like to think I have a bit of history when it comes to the value of his cardboard.

Whoops.....sorry.  I can't believe I referred to this abomination as a "big ticket" item.

I'm just shaking my head all around.
Posted by bamlinden at 8:28 PM

Labels: Linden Card of the Week, Opinion, To The Bike Spokes