It's not often that a Linden card I've never seen or heard of crosses my path.  Not to toot my own horn...but I feel like I've got a pretty good awareness of what all is out there.  I've built my master checklist over 20 years of knowledge, resources and help of fellow collectors and it's solid.  That's not to say that it's complete and 100% accurate.....there's always room for editing.

So when a fellow Linden collector threw a scan my way of a card that's nearly 20 years old itself, I did a double take and grew a huge grin.

In the 1998/99 season, Linden was off playing in New York for the Islanders.  Banished from Vancouver by the evil Mike Keenan and the (insert colourful metaphor) Mark Messy-eh.  Trev was still a hobby mainstay though and in the parallel heaven of Be A Player, Pacific, OPC, Topps and Upper Deck he had over 100 cards to chase that year.  I'm proud to say that other than a few show cards and ever-elusive 1/1's - I've crossed them all off that master list.

Which makes this new scan even more exciting.  It's been years since I've even thought of this set. 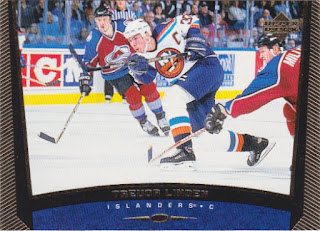 The scan makes it hard to see but I can tell you that the foil on each side is gold in color.

The regular base offering has silver foil, the Exclusive parallel (/100) is bronze in color and has a serial number stamped on the back, the Gold Reserve parallel has (you guessed it) gold foil - but also has a gold shimmer to the photo...which the above card does not.  Finally, the never-seen Exclusive 1/1 is also gold in color, has a regular looking photo and is serial numbered on the back too.

So what makes this card so confusing and rare? The back of this card.  No serial number.  I had no idea these existed.

So what's the deal?

Seems as though there was some overstocked un-numbered 1/1 cards that got leaked out into the market.  Said cards have/are being sold by someone (at relatively cheap prices...perhaps being unaware of what he has).  Said cards (of the Linden variety) were scooped up by a fellow collector and one made its way to my house as part of a recent package.

I was mentioning to a couple people that a card like this has me more excited than pretty much anything that has been put out by card companies this year.  Discovering something you had no idea existed is really cool and I love when I can go into my master checklist and scroll back a couple decades in order to do a little bit of modifying.

Yet another aspect of the hobby that I really enjoy...learning more about the projects you set out to chase.  Nobody is an expert, nobody knows everything.  And as long as you have an open mind and a thirst for knowledge, you can be quenched with information if you persist.

I CAN'T WAIT FOR HOCKEY SEASON AND TO HIT UP SOME SHOWS!!!!!
Posted by bamlinden at 8:20 PM