BEHIND THE MASKS - Leaf Enters The Mask World

Since their inception a couple decades back, I've been a big fan of the goalie mask insert sets that have been produced and released by numerous companies.

When Pinnacle set the bar in the 90's with their iconic Masks sets, I wasn't just blown away...I was hooked.  I still stop in my tracks when I see one of those great cards at a show or in a trade box.  In The Game did a really nice job of reviving the theme in numerous Between The Pipes products....and even when ITG no longer had an NHL license they did an admirable job of building solid mask sets.  Panini didn't really have much of a say with their goalie mask offerings but they too put out some cards with their Masked Marvels offerings.

It's been a couple years since a real robust mask checklist has been made but the new kids on the hockey block - Leaf, has decided to take a stab at an all-goalie product.

When I first heard rumblings last fall of this product I got a little excited, especially when I saw some of the mockups....say for one little feature... 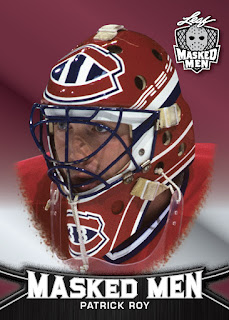 It's amazing what a little white line (or lack of) can do to change the complexion of a photo.

One of the nice things about being a part of an online hobby community is that some of the company representatives are a part of it and even take the time to promote and communicate new products.  When this Patrick Roy card showed up...many people (including me) began asking if the final product would include airbrushing.

Straight from the VP of Product Development for Leaf...

"we will be using non airbrushed photos for the mask insert"

That was fantastic news and I was really excited for the release in the new year.

Fast forward to tonight when I saw some new pics on Leaf's official twitter page... 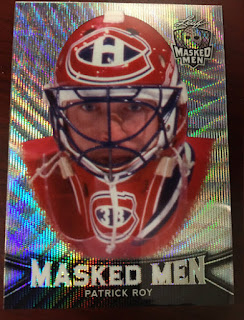 It didn't take long for the taste in my mouth to become a little sour. 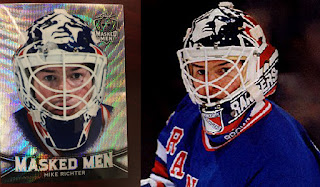 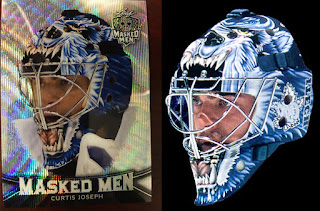 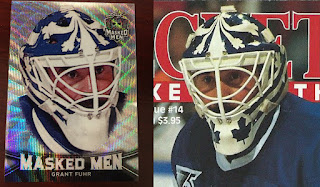 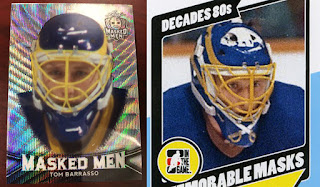 I mean really...why even include this in a product??

Oh, I know....because there are a couple diehard Barrasso collectors out there and will gobble these up regardless. 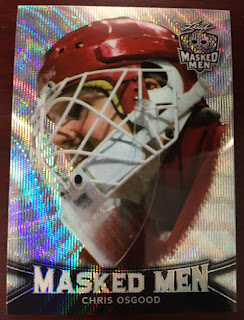 For the record - Chris Osgood should never be included in a goalie mask set - ever.  Period.

I guess Leaf fed us collectors a little bit of....what do they call it??  Alternative Facts?

Now there are some decent looking vintage fibreglass mask cards on their feed and not everything is a loss (shiny cards are fun...right?), but my excitement for the product went way, WAAAAAYYYY down tonight.