ONE OF THE GOOD GUYS - Johann Olav Koss

I'm going to drift a little from the hockey cards for this post but I hope you stay with me on this one.  I'd love to get your opinions and thoughts when I'm through.

Tonight I read, for lack of a better term, a rant.  A rant ranging in subjects.  But as I read this rant all I could see was negative, negative, negative.  It left me thinking about it for a while.  I'll admit - it bothered me.

This part I'll be brief with.

Yes we live in a world where some crappy things happen.  Shady this and illegal that.  People who don't claim responsibility or flaunt and abuse the power they've been given.  But I whole-heartedly believe that for every negative "front page story" out there, there are many more positive ones out there.  They just aren't what sell.  It's a shame.

And so I am starting a new topic on this blog.  And I'm calling it "One Of The Good Guys".

The goal of these posts is to simply give a person, organization or event that positively influences our world their "15 minutes" on my blog.

Now because my blog is sport related, I will stick to that subject (but there are a bunch of non-sport examples out there.....I promise you).

For my first post, I'm going to focus on a person named Johann Olav Koss. 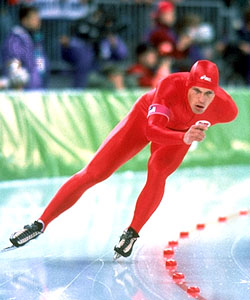 If you're old enough, you might know the name Johann Olav Koss.  For those who aren't, he dominated the speed skating events in the 1994 Winter Olympics in his native Norway.  It was the final year of his speed skating career and some felt he was on the downslide.  But he put on one of the all-time great performances in Olympic history.  Three gold medals, three world records (two of which remained unbeaten until the advent of the "clap skate").

But his story isn't just about speed skating.  In fact, when all is said and done, he might become better known for something other than skating.

In 1992, Johann was the lead Athlete Ambassador of an organization called Olympic Aid.  An awareness and fundraising program to help war-torn countries.  Koss became so inspired by this program that in addition to donating his time, he donated his olympic gold winnings to the cause and challenged fellow athletes to do the same.  An unprecedented $18 million was raised.

In 2000, Olympic Aid became Right To Play.  Their mission statement:

To improve the lives of children in some of the most disadvantaged areas of the world by using the power of sport and play for development, health and peace.

Their activities are facilitated by nearly 12.00 volunteer coaches, leaders and teachers.  They encourage leadership at all levels.  Junior leaders (some as young as 8-years-old) have become empowered through participating in Right To Play programs.

I chose Right To Play and Johann Olav Koss because I recently saw a fantastic ESPN documentary on the story of Right To Play.


I highly - HIGHLY recommend it.

Johann Olav Koss - One Of The Good Guys!

Now, if you've lasted this long I thank you.  I want to hear from you.

Labels: One Of The Good Guys