HHOF AUTOS - One And One

The best thing about this HHOF Autos project I started is the element of trading.  It would be really easy to just hop on ebay and bid, bid, bid.  But my wallet would hate me for it.  That's the big reason why I added the "trade only" stipulation.

But over the past couple months I have noticed that trading for these cards has proved to be thoroughly enjoyable.  My most recent transaction occurred when I had Captain Canuck over for some 'zza and some Hockey Night In Canada (Habs edition).  He provided the food and it actually factored into the trade.

But so did these great Hall Of Famers... 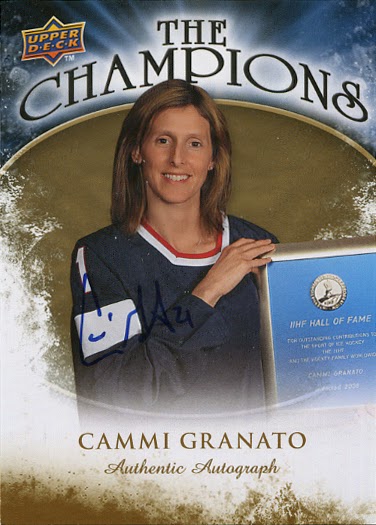 2010 proved to be a landmark year when it came to the Hockey Hall Of Fame.  Not one - but two women were inducted...the first two women enshrined (Angela James being the other).

Cammi Granato might just go down as the greatest women's hockey player of all-time.  She scored the first ever Olympic goal for the US women's hockey team at the 1998 Nagano Olympics (the US team would eventually win gold).  She is the team's all-time leading scorer with 343 points in 205 career games.

She was a trailblazer for women's hockey not just in the United States, but throughout the world.  There is no doubt that the effect she had on the game is being seen in spades these days.  Did you happen to see the Canada vs. US game at the Sochi Olympics?  Great drama.

The card itself comes from the 2009/10 Upper Deck hockey release.  The Champions auto insert set was a bit of a love/hate addition.  Some great names with hard-signed signatures like speedskater Gaetan Boucher, but a lot - A LOT of figure skaters.  I can see how some hockey folks might not like that. 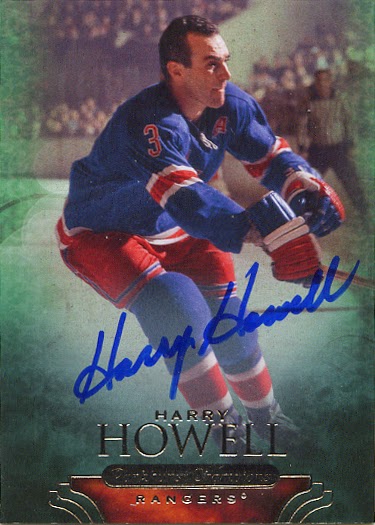 This Harry Howell card has a nicer look to it than the 06/07 Parkhurst offering currently in the collection.  It's marginal....but noticable to me.

I like that Harry is actually out on the ice doing something (whatever it is he's doing....reaching I guess).  I also like that the signature works up the card.

The previous card in the pc is solid in its own sense, but I like this one better.  Plus it has a better backstory to it.

After all, it was part of the pizza trade.  Thanks Cap't.!


Current Collection - 38 HOF Autos
Posted by bamlinden at 8:52 AM