Wednesday was monthly trader night at the local card store.  A week late this month in order to correspond with the release of Upper Deck's high-end beast of a product - The Cup.

And while I missed out on the case break team draft, I did play a couple hands of Pack Wars.......

I think I'm like most who play Pack Wars at the card shop.  Win a few, lose most of the time.  It feeds the gambler in me and I think it's one way to support the LCS when breaking a box isn't in the budget.

I had Alexander Burmistrov.  He was born on October 21. 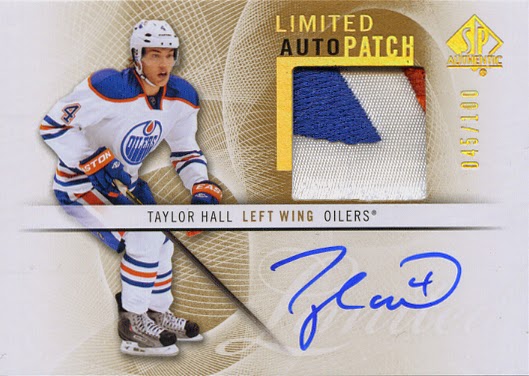 This beautiful three-color patch obviously comes from the oildrop on the crest, a hard-signed signature that looks really solid (for players nowadays) and a $10 price tag for the price of the Pack War.....what more do you want.

Now, I was hoping for a Linden auto/patch, but we all can't be too choosy.

I'm optimistic that I'll be able to parlay this into a Linden or two for the collection.

Regardless, I've got a few hands I can play now where It'll feel like I'm playing with the house's money.
Posted by bamlinden at 11:32 PM