OPINION - What's Wrong With This Picture?

It's been a quiet few weeks on the hobby front - at least in my little collecting world.  Work is just now simmering into a time where people aren't going gangbusters and we all will have some time off to enjoy the summer weather.

I went golfing for the first time this season.  With all the rust, I can't believe I shot one of my best rounds ever.  Must be the muscle memory or something (I'm going with the "something").

On the hockey card front, I've done a lot of snooping on ebay, but haven't pulled the trigger in a while.  In fact, I've only picked up 3 cards this summer - all in early June.  I'd say that's a hiatus....even if I wasn't really trying.

I did some design work for a challenge set up by another blogger.  Yeah, that went south quick.  No updates, no nothin'.  I think I'll just tackle it on my own over the next little bit.

On the Linden front, there have been a few new releases with his name inserted.

14-15 Premier has what could be some very interesting cards.  Much like the jumbo patches from Prime over the past couple years, Upper Deck has followed suit with the Mega Patch.

Linden has 27 chest logo cards (all of them are 1/1's...so in theory you could build the entire front crest - which would be a crazy amazing accomplishment), 3 shoulder logo cards and 4 sleeve number cards.  I'd be happy with picking up one of each.  Actually....I'd be thrilled.

And last (and maybe least).....The Leaf/In The Game frankenstein release of In The Game Used.

I've seen a few pictures, and while the cards do look nice, I can't help but stop when I see the hand coming towards my face to slap me silly. 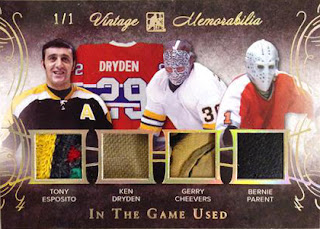 In my opinion it just gives me a bad taste in my mouth.  Mistakes like that just shouldn't be made on a high-end product like this.

Linden has 8 cards in the product.  But here's the catch.....each card has 4 versions.  Do the math.  That's THIRTY-TWO cards. Here's another gem.  Too bad the "T" in Thompson didn't curl around properly.  Again....how do you miss that?

I really feel like Leaf/ITG just ignores the player collectors out there and puts out shiny colored parallels with serial numbering to 3 or 5 just to create that feeling of "value".

I look at the cards that I've come across (and passed on) this summer.  Many of them are "super rare" and "one of a kind".  And of course, the price tag associated with it just makes me laugh. 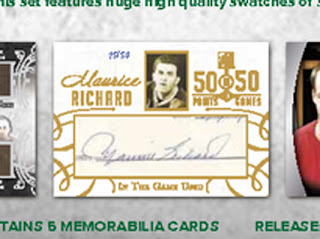 This one is off the sell sheet so it might be a mockup.  But boy...what an accomplishment for Maurice Richard.  50 Points in 50 Games.

Well, I've added the 32 cards to my checklist, but I'm not holding my breath to even adding 5 of these to my collection.  I just dont' have the appetite for it.

And God help me if they spell it Trever Lindin.
Posted by bamlinden at 1:18 AM 7 comments: 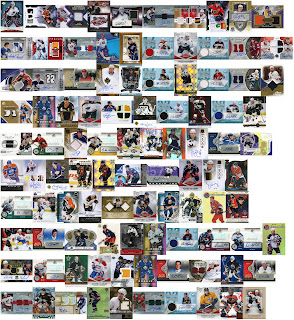 It's neat to see all of them and go through them putting this together.  I forgot about some of the great stories or quirky incidents that occurred over the six years of building it.

Ray Ferraro - back to back (you'll have to find them).

Kristian Huselius - I think it's my favourite card.

Lots of cards from the same products, but at the same time...I think I did a good job of mixing things up.


I'm not much for framing or displaying a collection.  I'm more the "hunt, find, acquire, store" guy.  These all live in a monster box in my closet.

This project is officially put to bed.

And I have an idea on what I'm going to do next.  Something a little more challenging, but will still be fun and (hopefully) inexpensive.  Details to come.

Today was the final day of our outdoor tournament season where I work.  What does that mean???  Well, I won't be working long hours for many days in a row anymore.  It'll be back to some level of normalcy.....and I am so glad it's here.

It's been a long, but fast summer so far (if that's at all possible).  I've had little time to enjoy the sportscard hobby, but have perused ebay on occasion, follow some twitter jibber jabber and tonight - I got back on the custom creation wagon.

It's been a LONG time since I've done any creating.  Part of it is that my brain had just gone mushy with customs.  Part of it was the lack of inspiration.  Part of it was I just didn't have time (or should I say I didn't give it the time).

A couple of posts that I read this week changed my attitude and effort on the matter.  The first was from a fellow Vancouver Canucks fan who makes custom Canucks cards to send through the mail.  But these are bang-on replicas of existing designs....and they are outstanding.  What I really enjoyed seeing were the players that only had a cup of coffee with the 'Nucks, yet there's a photo...and a card.  Outstanding.

The second is a blog post from custom card creator Bad Wax.  In a nutshell, it's a call out to custom creators to collaborate on a vintage set - from scratch. 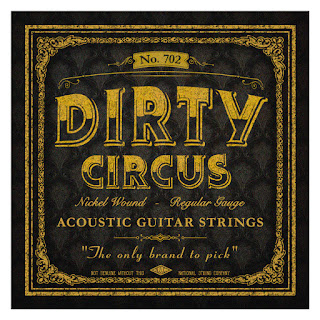 The name "Dirty Circus" is just a silly pair of words that I thought sounded cool together.  Other finalists for my product name were "Yatsi" and "Chappelle's", but I didn't see guitar strings when I thought of those names.

I think it would be cool to put hobby cards in guitar string packs.  One card per pack (a little smaller than cardboard today, but bigger than a tobacco card...with the opportunity to land a full 4x4 sized card).  And I feel like the cards are on black backgrounds as opposed to the normal "cardboard" colored products.  Think Upper Deck Black.....70 years ago.

I don't know what the next step in the process will be, but I do know that I had fun building this tonight and am looking forward to continuing on down the path.

And maybe this will get me back into more custom building.  I feel as like I need it.

And if you think my idea sucks.....well jump on into the mix and get your Photoshop skills honed.  Join in on the fun!!!