Ha ha ha. It's true, we're now dipping into autumn, and hockey season is once again upon us. I'm looking forward to the upcoming campaign and the hopes that time for some card collecting can come back into my world. It's been a very busy summer (one of the busiest I've ever had)...to the point where it has me questioning what it is I want out of my work life. I enjoy hard work and love working in an environment where my co-workers are all putting in their best efforts...but I don't feel as fulfilled with the work/life balance that I'd like. I hope that the pandemic challenges start resolving themselves in the new year.

It's why I've done so little collecting, and as a result, so little blogging. It's not for the sake of trying. I check my eBay searches multiple times a day, peruse COMC on a regular basis and try to keep my finger on the pulse of my Linden collection (and other PC's that I have). While I might not have the pickups to show for it, I did land a few nice items...and I've finally got some time to share.

So let's see how many blog posts I can cram into the remainder of the year to make this blog feel like it's accomplished something in 2021.

I want to start with one of the oldest Linden cards I've picked up in a very long time. 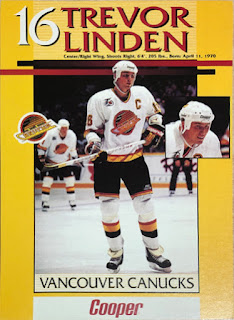 A collector on Instagram reached out to me a few months back to share a scan of a Linden card he had. He asked if I had ever seen it. It was a card I've not thought about in a long time. I told him I had a blankback proof that was such an oddball I didn't even include it in my master Linden checklist. After seeing his copy, I changed my mind. He placed it alongside another card to give me a sense of the card size (just slightly larger than a 2.5x3.5 inch standard card...but can still fit in a toploader) and I was hooked. I mentioned to him that if he ever found another copy, I'd be very interested. He said he'd keep his eye out.

A month or so later, he reached out to me again asking for my address as he had found a copy. I asked what he would like in return and he said that it was not much and was happy to send it along. I was absolutely thrilled.

The card has been in my possession for a couple of months now (sitting on my desk) and I finally sorted, cataloged and stored that card in my collection tonight. It has been a long time since I placed a card from the early 90's in my Linden PC. It was an awesome feeling. 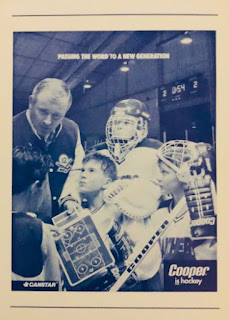 Here's a photo of the back of the card. The photo definitely dates it to the early 90's. I'm not 100% sure of the year on this - I couldn't find any information on this card in my Charlton or Beckett annuals from the mid-90s (yes, I've still kept them). Based on the killer Cooper helmet Linden wore to start his career, I gave it the 1992 designation.

The card is printed on decent card stock (of the time) and absolutely has the look and feel of a legit oddball item. Again, I couldn't be happier to add it to the Linden collection. In fact, it's probably the top pickup of the year.

So to Gary, a very heartfelt Thank You for not only your generosity but for reaching out to me to begin with. Social media has been a fantastic outlet for finding, discovering and landing cards...some of which are likely impossible to find otherwise. I appreciate your kindness and will do my part to pay it forward. Cheers.

And speaking of social media...anyone with more info on this card, I'd love to hear about it. The promo that I have also included Mike Vernon (for what that's worth), but I've never seen this card out in the wild ever before.

Have a good one everybody and stay tuned.  I've got more Linden pickups, some Oscar Gamble goodies, a few goalie masks and more.