While a simple 30-year-old oddball card can get my enthusiasm and excitement brewing, there is something to be said for the "big ticket" cards that have been produced of my PC guy. They don't appear as often as a decade or so ago...but when they pop up - I pay attention.

And when the card sits at the right price...I get a little grin.

Case in point, this emblem piece... 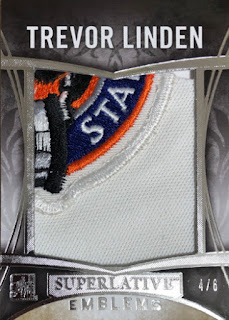 These jumbo patch cards definitely caught my interest when they first were released in 2015. They came on the heels of the wildly popular (to me) UD Mega Patch cards. These Leaf offerings included six unique emblem cards - that created some sort of collective patch. Definitely some of the nicer cards to come from Leaf at that time.

As mentioned, these bigger ticket cards raised my interest and over the years I've been able to land four of the six pieces (and knowing where that the other two have surfaced and are accounted for). 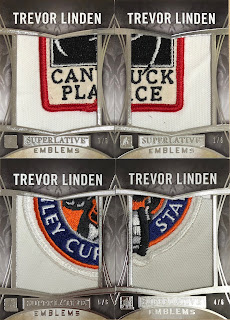 I think they create a pretty solid set. I should have repositioned the bottom two cards as they go together lengthwise as opposed to height. But I wanted to fit it all nicely into one photo for you guys.  :)

I didn't hesitate too much when snagging this most recent emblem card because I just haven't purchased as much for my Linden collection over the past couple of years. I guess I gave myself permission to splurge a little bit. That said, the price was more than reasonable and to land the last of the six that were unaccounted for...made it worth it.

I thought this would've been my biggest ticket card of the year...but it has recently been surpassed. I doubt it I will be able to share it before the end of the year (as I still need to have it shipped), but it could go down as one of the top cards I've purchased for my Linden PC in the past 5 years - easily.

Posted by bamlinden at 9:12 PM No comments:

LINDEN CARD(s) OF THE WEEK - Mailday!

Well, my two weeks off from work ends after tonight...and while I do feel a little relaxed from the hectic summer at the workplace, I can't help but feel disappointed that I have not accomplished nearly as much as I would have liked this past year...and over the past 2 weeks as well.

But I don't feel too bad for not taking on too much over the past number of days. Work took a big bite out of me...so no apologies that I decided to basically sit "off the grid" for a few days.

But it's back at 'er tomorrow...so I better post on the blog while I can.  Ha.

In all honesty, this post is one that I'm really excited to share. It's not just a mailday, but one from a fellow Linden collector. I've added four really nice cards to the PC. Let's take a look. 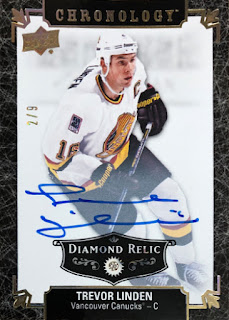 This is a stunner of a card in person. Beautiful design, great hard-signed signature and the diamond just provides that extra something. I love the design with the accented border and simple presentation. Clean and classy.

Numbered to just 9 copies, I knew this would be a big land to my collection. 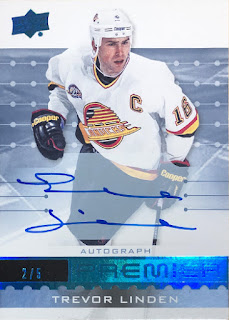 This card just shines...for reals. I love the blue punch that comes on the bottom part (and in the UD logo) as it just compliments the hard-signed auto perfectly. Another low print run card makes this a real find. 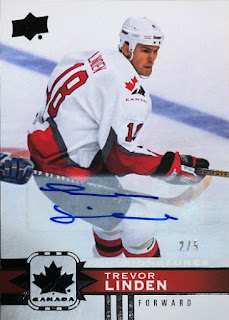 Another tough card to land with just 5 copies out there, this Canadian Tire Team Canada card really brings a smile to my face. I am just enamored with anything and everything Linden Team Canada. To many, it was such a small part of Trev's playing career, but I think it's such a cool part of his hockey story. 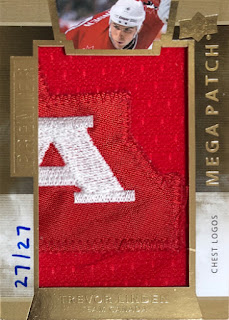 Speaking of...this might be my favourite set build within my Linden collection. Mega Patch awesomeness x27. This final piece of the "Canada" at the bottom of the crest gives me 10 unique pieces of this jersey front. What's even more exciting is that it adds to the overall picture of pieces that have surfaced since this set was released 7 years ago (how time flies).

I absolutely love this updated image showcasing every piece that has popped up over time. Just six patches have yet to cross my eye path...only a matter of time.

This Mega Patch card was the starting point for all four of these cards landing in my collection. I was excited to see it hit eBay but was equally as surprised since the seller was a Linden collector that I've known for quite some time. I instantly hit the Buy It Now and reached out to him to see if he had any other goodies that he was thinking of parting with. I was thrilled to see three more cards that caught my eye. What was even better....his asking price was almost bang on to what I was going to offer (great minds).

Thanks Elliot for the fantastic transaction. I am over the moon to add these cards.

Posted by bamlinden at 8:51 PM No comments: