LINDEN CARD(s) OF THE WEEK - A Milestone Of Sorts

With Leaf's checklist release of their upcoming ITG In The Game Used product (and subsequent 20 new Linden cards to chase....most of which are limited to 9 copies or less....don't get me started), my quick calculations show that Trev now has over 2000 different cards that have been released.  It's been quite the adventure since the 2010/11 season when Linden was inserted into sets as a retired player as opposed to the occasional inclusion into a product as an aging veteran.

Add to that the 'new kid on the block' - Panini as well as In The Game's knowledge that Linden was a fan fave among hobbyists and the checklist ballooned....fast.

Leading into the 2010 season, Linden had around 1200 cards (according to my master checklist).  That's over a 22-year span.  In the past 6......800+ cards.  Parallels galore and insertion into numerous products created a bit of an oversaturation in my opinion.

But that's how the hobby world has decided to structure itself and so I tackle the challenge in my own way....at my own speed....and with my own decisions on what to buy and when.

So let's take a quick look at the recent pickups (to celebrate in a way). 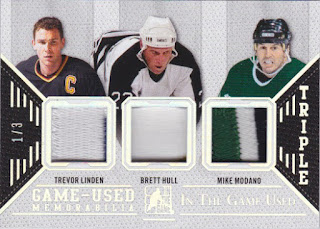 This card came from last year's ITGU offering.  A healthy 42-card chase that had me quite disinterested early.  I've slowly picked off a card here and there still have less than a quarter of the cards available.  And the prices on these in the secondary market - plummeted.

That's good news for me.....and it's the only reason why I took a stab at this one.  Definitely not because of the killer swatch pieces (Modano is nice).

I must admit....I bought this card mainly because I could cross it off the list. 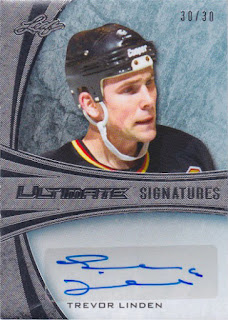 This auto finishes the rainbow of cards from this set (I don't count 1/1s anymore in the quest).  Would've been a killer card if it was hard-signed.

Funny thing is I bought this one way back through COMC and since then have picked up the /9 for about the same price and the /3 for less money.

This hobby makes me laugh sometimes. 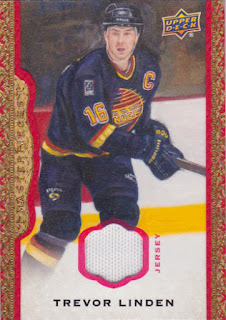 This one had me laughing as I forgot that I needed it.  I've passed many copies on eBay with nary a look.  Then I decided to update my wantlist and discovered the hiccup.

I didn't rush to grab this one (still looking for a good value on one) and when this one reared its ugly head I struck.  It might be the first time I enjoyed chasing a white swatch.

Price was right and it finished off the tidy 7-card Masterpieces chase.  Now that was fun.

If only they could've improved on the picture....the older Masterpieces release was way nicer.

Scary to think that this red memorabilia parallel was the most exciting card of the three for me to check out.  Funny how cards sometimes work that way.  Scarcity doesn't always equal desirability or value.

So that's three new cards to the collection.  I've got more to share, but that'll be for another day.

And a celebration of hitting the 2000 card plateau.  I'm curious to see how long it will take for this hobby to hit 3000 Linden cards?  I hope (and expect) it will take longer than 6 years.
Posted by bamlinden at 11:23 AM 1 comment:

I made it!  I made it to the end of July (I knew that I would).  The last couple months have been a big grind but things are about to shift into a new gear.

August brings with it some vacation time and I'm officially off work for a couple weeks.  Unofficially...I might have to pop in for a day or two to get some stuff ironed out before and even bigger trip.  Can't divulge much on that one at this time but I can definitely say that August will be an exciting month.

In the card collecting world, things have been pretty quiet.  A couple new releases here and there but nothing that really gets me excited anymore (more on that in a later post).  I've picked up a few cards (thanks to Kevin and his US address) and so I did some scanning this afternoon.  I've got to say that even though things have slowed down considerably from 2-3 years ago, I can still jump into this hobby and have a blast.  Hunting for stuff, digging for a great deal, chatting topics with others and enjoying the pickups that others track down.  It's a great world.

I recently popped into one of the local hobby shops and not soon after was hit with this card. 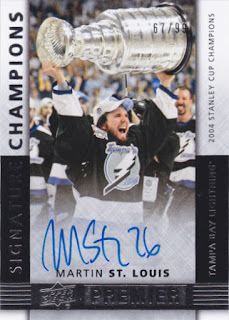 The other thing I love about this hobby is that people look out for one another (thanks Captain Canuck).  I've done a fair job in advertising what my various projects are and a lot of people know to put Linden cards, mask cards, Oscar Gamble cards and Stanley Cup raising cards aside (or at least in the back of their heads for future access).

And while it had a healthy price attached to it, I'm always happy to pay a little bit more to obtain something locally.  This offering has slid down the price chart considerably of late and is now selling for $4-5us on eBay.  I paid a little bit more and that's.....OK.  Like I said....it's the price for buying local - and I'm good with that.

I still am struck by how much I like the looks of these cards.  What a fantastic concept and execution done on them by Upper Deck.

In the interest of picking up more great deals, I finally started a COMC account (I had been using a fellow hobby friend as my go to for COMC pickups and thought it was about time I just buck up and do it myself).  One of my first purchases was another card from this great set.

Who knows how long it will be before I have it shipped...I'm likely to wait until I get a few cards in my purchase pile.  So stay tuned.

Looking forward to sharing more of my recent finds and I might even dip into the closet and pull out some hidden gems.

LINDEN CARD(s) OF THE WEEK - A Pair Of Ultimates

Hey everyone!!  How goes?  Work has finally cooled down for me and I'm getting back into a bit of a normal routine.  Still busy, but not crazy long days anymore.

First, an unfortunate lost card callout (they do happen). 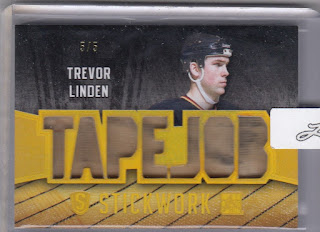 This card was bought by me on eBay back at the end of May.  Sadly it has not arrived yet.  The seller and I have communicated a number of times and they are super to work with.  As bummed as I am that this card is lost, I'm thrilled to know that there are sellers out there who look to work WITH the buyer when crap hits the fan.

Just a heads up in case anyone happens to stumble across it.  It was coming from Winnipeg to Calgary.  Lost in transit.


Second, I read a cool article written by Trevor back in his rookie year.  A fun read.

I enjoyed hearing about the preseason game in Duncan, BC and it reminded me of the infamous #49 jersey (the number he wore as a rookie during the preseason).  I did a quick Google search and discovered this... 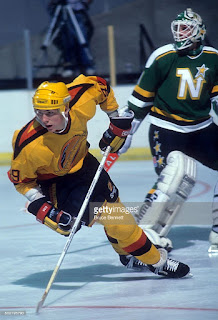 What a great pic.  Never seen it before.  I might just have to see how much one of these go for.  Would surely look great signed.

Lastly, let's take a look at a pair of Linden cards that have found their way into my collection. 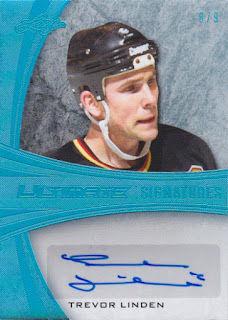 These Leaf Ultimate Signature cards are nice but would be a heck of a lot nicer if they were hard-signed.  Not sure how they determine which ones get the sticker treatment and which ones don't (he has both in different products).

The sticker just detracts from the whole vibe for me which is why I decided I wouldn't fork out too much for these tough parallels.

A local collector had one of these at the monthly show and asked if I was interested.  At the time I was (since I didn't have this one).  I asked how much and sadly the asking price was way too much.  I made what I thought was a fair offer and he declined.

Good thing in the end as I bought this copy for half the price I offered the guy at the show.  She went cheap.....especially for a card /9.

Why did I offer the price I did at the time? 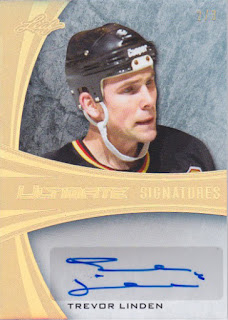 Because I had bought the /3 version recently (for a good price IMO) and refused to pay more for the /9 version.

These are cards that are nice to knock off the checklist but are in no way "must haves".  I only chased them because I got them for great prices.

I kind of have a list of those cards that I am not chasing (Vault) and those that I am likely not to chase unless the price is really good.  There are a handful of cards that I've got an eagle eye out for and those are the most desirable at this time.  Things like some older issue stuff, hard-signed autos and unique or landmark cards in the Linden world.

Not too many new releases with Linden out there (which suits me just fine).  I'm happy to drift through the summer with minimal card purchases.  I have snagged some COMC stuff (and even signed up for it myself....yes, I caved) and am excited to add some fun items for other non-Linden projects.

But that's for another day.

Hope you're enjoying summer.
Posted by bamlinden at 12:04 AM No comments: