In my previous post I shared a great gift I recently received from a fellow Linden collector.  What I didn't mention in the post is that he included a few extras.

Now....they're Jason Arnott cards so my first inclination was that they were meant for someone else - an Arnott collector.  Thing is, I don't know any Arnott collectors - especially not locally.

So in my 'thank you' e-mail to him I ask who the cards were to go to.  He responded with "They're for you".

See if you can figure out why... 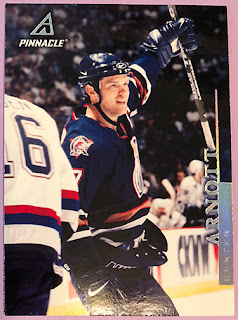 Yeah.....it was clear as day as soon as I took a second look.  I had a great laugh and thought about how great it was to see a 20-year-old piece of cardboard (that is likely worthless in most people's eyes) shine some new light - and definite appreciation in someone's collection.

This is a fantastic 'cameo' card.  I never would have picked up on it and am certainly glad someone else did.  In fact, I'd love to know how he stumbled upon this find.

It's certainly Linden and so a new addition to the master checklist was made.  These are often the most fun adds. 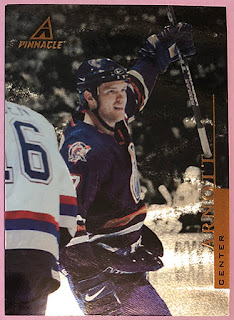 Nothing like a good 'cameo' parallel.  This is fantastic.

Now with the regular Linden from that set, there is no Rink Collection parallel.  He is listed as card #106 but the parallel set only included the first 100 cards.  So just the base for Trev.

This 'cameo' will most definitely do though. 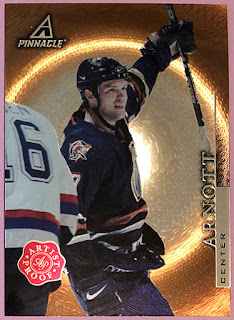 And this Artist Proof.  Wow!!!

The base card was a terrific gift - unexpected and just what I love about Linden collecting.  The Rink Collection was a great addition.  But this Artist Proof is just completely jaw-dropping.

Looking at it now I still can't believe that he sent the whole trifecta.  Amazing.

I love how they had to include Linden's cameo in the card.  Cut out all the background stuff but keep what's needed.  It would have looked pretty weird trying to Photoshop Trev out of the shot too.

Thank you very much again Kevin.  Your generosity and selflessness is something I look up to and try to emulate.  It also gives me a great energy boost when it comes to this hobby.  Boy do I ever love it.
Posted by bamlinden at 10:18 AM No comments: