Last week at the monthly trade night I was the "fortunate" receiver of a "generous" gift.

There are a number of collectors, vendors, shops and just general hobbyists who know I collect Linden.  I do a pretty good job of subtly plastering that info wherever I go.  Be it me donning my Linden jersey or Canucks hat or maybe they just see my username on a number of online sites - bamlinden.

But there is a smaller group of people who know much about some of my other projects.  Be it my #WalletCard pc, Parkie Project, hard signed Hall Of Famers or my simple Raise The Cup chase.

"Thankfully" there are a few people who know how to really make a guy feel good about his collections....and is "willing" to "help a guy out" anytime he can. 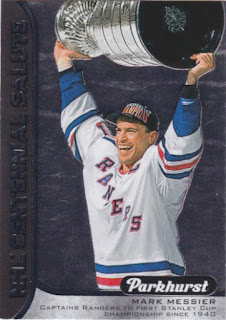 The look on my face when this card slowly glided over the countertop and into my view must have been spectacular.  In fact, the guy who gave it to me (let's call him "Captain Canuck") went out of his way not to text me a photo of it or share the info ahead of time.  Instead, wanting to get a front row seat at the tirade.

And a glorious tirade I shared.

I have really enjoyed collecting cards of guys enjoying that pinnacle moment in their career - hoisting the Stanley Cup.......but the cards with this guy on it - oh man.  It's hard to crack a smile on these ones (but I'll do my best since it was a "gift").

The worst part about it - and I am reliving it right now as I look at it - this is a really nice card (I just threw up in my mouth).  It's a great photo and the silver foil really makes the design pop (scan again does no justice....in fact I think it makes Messier's teeth more white).

Now into the binder where you can be forgotten.

The long weekend is here - and it couldn't come at a better time.

My first three months of work this year have been unlike any other season for me and the long days (and nights) spent editing have got my brain pretty fried right now.  Some relaxation and time to rejuvinate are most definitely in order.

So I decided to spend some time today......sitting in front of my computer - ha ha.  Yeah, I enjoy spending time sifting though my cards trying to organize them better.  I've also done some scanning so I can share some of my latest pickups (for my next thread).  But a good amount of time this afternoon was spent pondering about a certain card in my collection.

Indulge me if you will as I show off a trio of cards that have sat in a box for a good 15 years.  A couple stories will weave their way in too. 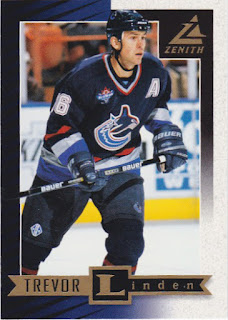 I remember these cards were pretty high end back in the day.  A little thicker card stock, shiny surface and some gold foil always impress (or at least it did 20 years ago).  Love the All-Star Game patch on the shoulder.

I also noticed when I flipped the card over that it was one of the last Linden would show in a Canucks uniform before his trade to New York.  In fact, the transaction had already been completed and was noted by the ever popular (in the 80's) "Traded to Islanders 2/6/98".  Hard to believe it's been almost two decades since that happened.

So why am I showing this card?  Stick with me....you'll see.

In the meantime, let me share a couple Linden stories (as I received a nice request to share my Linden background).

I've been a fan of Trev's even before he was drafted by the Canucks in the late 80's.  I was a Vancouver fan...enjoying their run to the Finals in '82 and LOVING those "Flying V" jerseys.  I lived in Medicine Hat when I was really young and my parents knew the Linden family.  I think my dad worked a bit with his dad.  We would go over to their house every once in a while to visit, have dinners, BBQ outings and such.

I was younger than Trevor and was closer in age to his younger brother Jamie.  But I remember hanging out with Trev a few times.  Following along while he delivered papers in the afternoon (and making a quarter or two every once in a while) and even watching him play pee-wee hockey.

We moved back to Calgary a couple years later but our families still stayed in touch....for a few years.

By the time Linden was playing junior hockey and winning Memorial Cups, I was more of an admirer.  And when he was drafted by the Canucks, I was an excited fan.

In the late-80's I wasn't really collecting hockey cards but found myself getting back into them not too long after.  It took a few years to discover player collecting and I still remember the day I became a Linden collector. 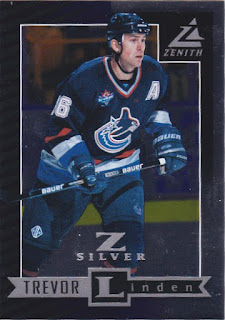 This is the Zenith Z-Silver parallel of the above base card.  Silver foil (doesn't scan well) Pretty easy to track down to this day and doesn't demand much coin.

Anyways, back to my story.

I was at the local, monthly card show probably about 20 years ago (this is the same show I still go to these days).  Linden was maybe not a "superstar" in the world of collecting, but he had some value.  I would go table to table and see guys with monster boxes and dividers with names like Gretzky, Lemieux, Hull, Selanne, Yzerman.......and in some cases - Linden.

I had seen them a few times but never really thought about it.  I was concentrating on my current chases - cheap sets.  Yes, it was the junk wax era and I couldn't get enough of it.  Looking back, I can only cringe at the amount of money I invested into cardboard that wasn't worth the paper the photos were printed on.

I dabbled into vintage for a while but nothing really quenched my thirst.  Nothing was really doing ti for me.

Until one show when I was at a table I regularly checked out (I can still envision it now).  Super long-haired guy.  Lots of boxes.  In one of those boxes were a stack of Linden cards.  Sign on the box said ".10 cents a piece".  I grabbed all the Linden cards to check them out.

There were dozens of them - and they were all different....no doubles.  There were probably 50-60 cards in there so I grabbed them all.  Five, six bucks for all that?  Sounds like a great deal.

And it was.  By the time I got home and looked through them all they had completely motivated me.  Unlike any high dollar card I have ever owned before or since.

I thought to myself "I must have every Linden card ever made"!!  Ha ha.  Not quite.  I looked into it (using a Charlton and Beckett yearly guide) and determined that I had maybe a tenth of his cards.  Yeah, he was already into the 400-500 card range.

But a player collector was born......and I've been enjoying it ever since.

Seriously though.  I wanted to share this next card as I received a very hefty offer to sell it today.  It had me thinking long and hard about whether or not I should sell it. 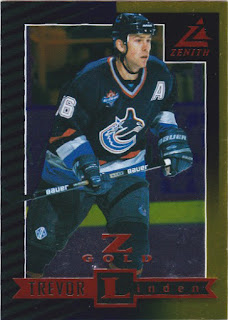 This is the Zenith Z Gold parallel.  Limited to just 100 copies, it was a huge hit 20 years ago and is near impossible to find these days.

Gold foil (again...scans like garbage) and boy does it pop.  This copy hasn't seen the light of day in a long time....but boy does it still impress. 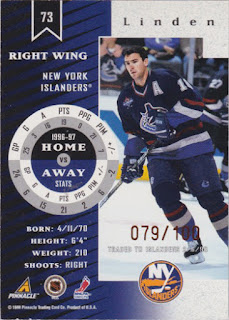 Here's the back (since I was asked to share a scan of it).  I see a little chipping on the bottom edge....which I instantly remembered as soon as I flipped the card over.  You can see the Islanders logo which sticks out like a sore thumb and how about those stats.  Clever or clumsy?

Funny thing about this card is I can't for the life of me remember when or where I got it or how much I paid for it.  Usually I have a good story to share about my cards but not in this case.

In all likelihood I picked it up on eBay and paid a decent amount.....but not nearly the price I was offered to sell it for.

Made me think about where the line is and how comfortable I might be about selling pc items.  I've rarely done it before (in the few instances I've moved a pc item, it's been in a trade for something huge).

I had to decline the offer respectfully and he understood.  I collect because I enjoy collecting and not to make a few dollars - especially when it comes to personal items.

And I know I would feel guilty knowing that I got way more than the card is worth.  With 100 copies, I know one will eventually pop up.

Hoo boy....a couple weeks just flew by now.  I've been a busy guy at work and have had a couple plans throughout the weeks to get me to thinking that I need a vacation or something.

Actually, I've come to realize that I've just got a ton of stuff on my plate and need to shuffle some of it off.  But some of that is hard to do when you're in a bit of a design funk.

In addition to a few new Linden pickups (which I'll show off in an upcoming post), I was the recipient recently of a very cool gift.  And seeing as today was opening day in the world of baseball....I figured it suited the vibe. 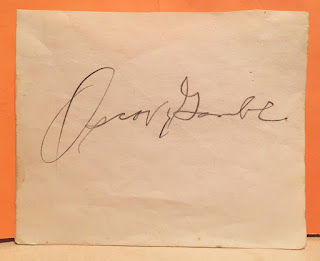 This Oscar Gamble signature came from an autograph collector who follows my #WalletCard twitter feed.  He commented on a couple posts of mine and we had a nice back and forth.  He then indicated that he had a Gamble auto from back in the day and asked me for my address.

Yeah, he just sent it off.....and he lives in the States.  And it arrived in a toploader to boot.  Pretty cool if you ask me.

This auto looks like it came from an autograph book as it has that kind of paper feel to it.  My immediate thought was to create a custom cut card from it (after I do the bazillion other things on my list) but it's a little large for a regular sized card.

But how about an oversized cut auto?

How about an oversized #WalletCard cut auto?

That's right....I'm thinking of creating a custom oversized cut auto using this signature and the iconic '76 Topps Traded card.  I can see it now.........frotastic!!!

This great gift is a reinforcement that doing good things means good things happen.  And to Frank, if you do read this.....thank you very much.  I will think of your kind gesture every time I look at this auto.