WALLET CARD - Getting Caught Up

Yes.....finally.  I have scanned some cards.

I sat down tonight with the goal of getting a little more caught up with my player collections (confirming checklists, noting 1/1 pickups and seeing just what I've managed to snag in the over the last few weeks).

Rather than dive into my Trevor Linden collection, I thought I'd ease back into the scanning and sharing world with my #WalletCard goodies.

While I've been way more relaxed lazy with my #WalletCard twitter feed, I still am having a fun time searching for....and snagging the odd Oscar Gamble card.  The last few weeks have brought in a four-pack of Gamble goodness. 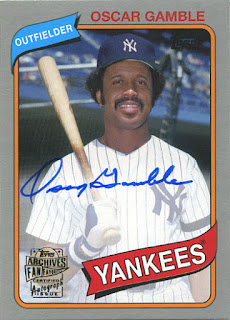 When I saw this product come out and noted that there were a few auto parallels to the regular base signature, I knew that I'd have to be real patient in order to get them at a price I'd be happy with.

The silver cards were initially going for over $40us.  Not a chance.  Even at half that I'm passing.  But the patient bird gets all the worms.

I saw an ebay auction for this card.....plus a couple Blue Jays autos from the same product.  Yes....the ever popular multi-card lot.  I had a friend with a US address bid for me and ended up winning the three cards for the price I'd have happily paid for just the Gamble.

So now I've got this great silver parallel crossed off the list and a pair of solid traders sitting in the tradebox that should recoup all my costs on the lot.

Who are the Jays you might ask?  Tony Fernandez and Devon White (I believe the Fernandez is the silver parallel too). 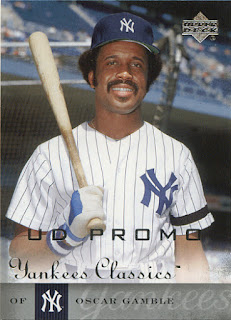 This was a fantastic surprise from Captain Canuck.  I like that he likes my #WalletCard project.  He's already shipped a few cards my way.  But this one really takes the cake.

Not because they used the same photo as the previous card...but because of the beautiful silver foil that reads UD PROMO.

When I first saw this card I thought maybe it was the signature version...but in all honesty, this is the much better version.

This card wasn't even on my radar.  Not on my master checklist.  Not one I would have even thought of looking for.

A true rare find in my books.

Huge thank you to Captain Canuck.  Always a pleasure doing business with you. 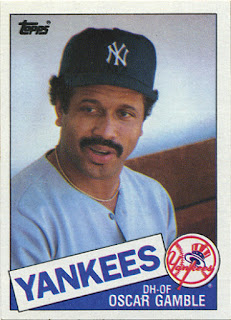 But his generosity didn't stop there.  Included with the promo card was this gem.

A perfectly off-centre 1985 Topps offering.  Nice fuzzy text and a horrible photo.  It's so ugly that I love it.  The back of this card has the typical dark Topps cardboard that's near impossible to read.

I swear, if a card could have patina....this one would be dripping with it.

And yes, it's one that would be overpriced in a dime box, but it'll go down as a card with a story in my collection. 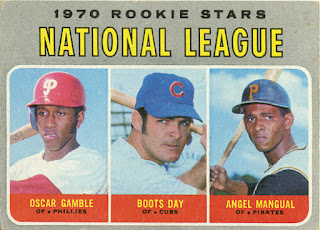 This last one goes down as the "big purchase".  A whopping $10.  It's not in mint shape but I think it fits perfectly into what I want this collection to be.  I love the centering on the card (I've seen many that look real bad) and it's clean of creases or marks.

This pre-fro rookie card of Oscar features Boots and Angel along side.  It's the oldest baseball card I own and I love the fact I've crossed off the first card on the list.

A easy purchase if you ask me.

I've been going pretty slow with this project.  So many of these cards I could pick up with ease (and cheap) by heading to a COMC or Sportlots, but I want this to be fun.

So I am picking and choosing.  What I really need to do is go to a show in the US where there will be more baseball.

Holy cow......blogging just hasn't been in the cards lately for me.

I was all excited to show off some of my Linden cards, Oscar Gamble cards, Raise The Cup cards and more.....but the cold from hell destroyed me in November (and work).

One day after my last blog post I ended up with a fever and the oh-so-fun shakes.  It drained me of all energy and it's taken pretty much the whole month to recover.  This one was a doozy.

It doesn't help that work has been busier than ever - in fact, it's the busiest November I've seen in the 7 years I've worked at this company.

But I can see the light at the end of the tunnel.....or the train comin' right at me - one of the two.

I just wanted to say 'Hello' and that I will have some stuff to show off soon.  Promise.

In the meantime, I'm going to share a quick concept I came up with (since I don't want to scan cards tonight.

OK.....with November being Movember month and guys growing out their moustaches, I think that one of the card companies should capitalize on it.  But I think it should be done a little more uniquely than just some photos and a simple design.

Hockey cards have mildly embraced the sketch card concept that has exploded in the non-sport world.  There are some great artists out there doing tremendous work.

I think there should be sketch cards of players sporting their 'stache inserted into a product like UD Series I (which came out at the start of November).  I think it would create some cool "long shot" pulls and the resulting sketch cards would be (I think) pretty desirable to chase.

You could even find a way to incorporate a way to generate funds for charity.

I don't know if that's a record or something, but boy was the month of October busy.

Work has been the ever-constant gong show, I was sick for a week and I set up at my first card show in over a decade (details on that day to come).

But I'm really focused on my nephew's video game marathon next weekend.  Saturday, Nov. 7 he will be taking part in an all-day gaming experience - all for charity.

He is raising money for the Alberta Children's Hospital.

I'm here today to let you all know that I have some great giveaways to help garner support.

Check out our Kyle 4or Kids blog page for details.

Every bit helps get us closer to our goal of $700us.

Thanks for your time!!!


And I promise more posts in November.  :)
Posted by bamlinden at 1:19 PM No comments: