A busy month on the work front and a slow collecting month changed drastically when I made the last minute decision to make the trek up to Edmonton for the Summit Card Show - the biggest sports card show in Western Canada.  I went last year (after a number of years away) and absolutely loved the environment.

I was unsure if I was going to go because.....y'know.....work.  But I ran into another collector on the Thursday prior and he really made the point that I should go.  Spending some time to unwind and enjoy the collecting world is an important part of the hobby.  After all, if you're not partaking in the hobby....it's not much of one.

So I jumped in the car early on Saturday to make the three hour drive.  It was actually a really nice trip.  Great weather, not too busy on the roads and some good tunes to keep me company.  I arrived just in time to get in line for the big auto snag of the trip (more on that in a bit).  But first, a pair of Parkie pickups. 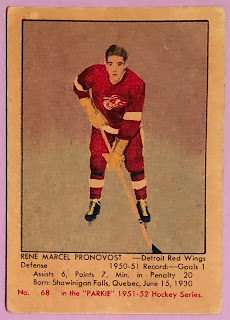 There were a few tables that had Parkies, many of them were either in really bad shape, overpriced or slabbed.  I'm looking for decent condition, nicely entered raw cards.  I finally found a dealer that had a number of them - and for a decent price.

This Pronovost was one I selected because of the name.  I really like the aesthetics of the cardboard and it has just a hint of a surface crease.  But I'm more than happy with it.

Again, it was all about the name.  Pronovost isn't the superstar that others in the set are but it's nice to cross off a name like this. 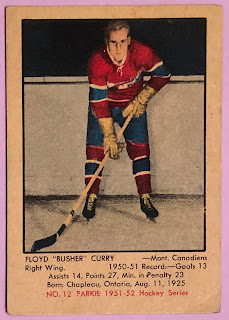 Another well centered offering that has really nice colour and pretty solid corners (all things considering).  I went with this one because he's Montreal.  I feel like those players just have an artificial premium on them (I could be totally out to lunch on this).

Clean backs on both (clean enough for me) make these a dynamite pair.  Like I said, I could've gone overboard and grabbed another 5-10 cards but I held off.  There was a beautiful Terry Sawchuk RC that was ungraded and I seriously considered it.  It was priced at $1200 but would've been 20% off.  Wasn't planning on a big purchase like that but I'll wonder if I left a good deal on the table in Edmonton.

This puts me at just over 20% of the set.  Of course there are a ton of big names on the wantlist.

Who remembers where they were when THAT homer was smacked?  I do.  It's still one of the pinnacle sporting moments I've ever seen - and I bet Joe Carter has been asked about it every day since.  EVERY.  DAY.

I'm sure he doesn't mind though.

My co-worker, whom I've worked with for a decade, and I have taken sports many times and I remember a number of years ago him saying that he has a Toronto Blue Jays magazine with Joe Carter on the cover that he'd love to get signed one day.  He's not a collector or anything, but this would be the exception.

For some reason I kept that little nugget of info in my brain and was thrilled to see Carter's name on the signing list for the show.  I though briefly about seeing if I could snag the magazine without him knowing but it was too much of a logistical challenge.  So I did the next best thing. 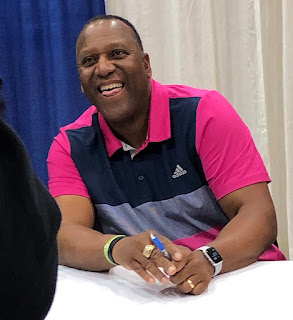 I went to Edmonton and got a nice 11x14 signed by the man himself......and personalized to my co-worker.

It's a great going-away gift as he's moving in a month or so to BC.  I'm pretty thrilled for him as he pursues the next chapter of his life with his family.  But I can't help but be devastated at the same time as he's been one of the best co-workers a guy could ask for.

He's really opened my eyes with regards to non-profits, charity and the act of giving without expecting anything in return.  He's been a huge influence on me and it'll be one thing that will last long after he's moved.

Anyways.....enough of me blabbering.  On to the final - and I must say, stunning item I picked up from the trip.

It was at the same table that had the Parkie cards, just a few items in bins labelled "50% off".  I don't need much more of an invitation than that.

There were a lot of programs and some neat, older items.  It was one in particular that had me doing a double take. 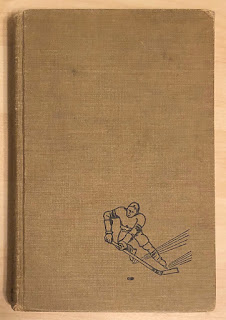 It doesn't look like much upon first glance, but it was the covering that was protecting it that had me take a second look.

This is a book entitled Down The Ice, written by the iconic hockey broadcaster Foster Hewitt. 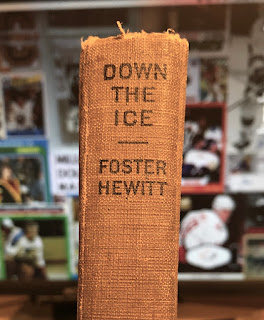 For those that might not know the name, Hewitt is THE MAN when it comes to play-by-play historically in the NHL.  He introduced Canada to the game first over the radio airwaves and then eventually on television.  He was the voice of hockey for a generation.

And I'm a sucker for broadcasting items. 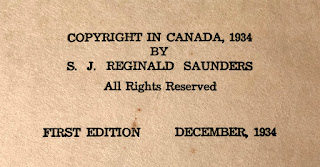 But what really got me going was on the page prior.....

One of the nicest signatures I have ever laid eyes on.  This is a beautiful fountain pen example that just flows across the page.  You don't see the guys these days with penmanship like this.

I was quick to snag this item and thrilled to show it off at the show - with more than one gawk and a few asking which table it came from.

Funny thing.....this wasn't my first encounter with Foster and his signature.  A number of years ago I found his autograph in a Hall Of Fame book that I picked up at a used book sale.  It's neat to see just how different the two signatures are.  Clearly one is from his earlier days and the other is from after retirement (that's my guess anyways).

Regardless, I'm over the moon at these pickups....and the fact that I made the trip to the show.  It's a great reminder to me that I need to take some time every once in a while to enjoy things and stop to smell the hobby roses.
Posted by bamlinden at 10:45 PM 1 comment: