It's been three years since I posted my thoughts on Trevor Linden digital cards. At the time, my investment into the Topps Skate! app was minimal. A lot has changed over the three years.

I am now checking the app almost daily. Ripping my complimentary virtual pack, collecting my coins and using those coins to open packs from all sorts of products, and yes...hunting down Linden cards.

To date, he has 18 unique digital cards and I have landed 12 of them. And what can I say...I've loved the chase. Finding a Linden in a pack I open, trading with others on the app...it's pretty much all there.

But his most recent cards have me slightly bummed. 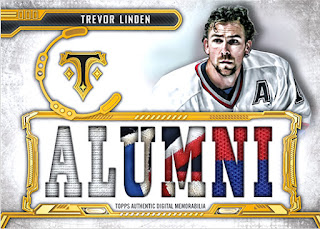 Let's just start by saying that this is a BEAUTIFUL card. I've said it before, but what I wouldn't give to hold a physical copy of this one. Dynamite.

But this card is pretty much impossible to land if you are only enjoying the app for free.

This was the "award" card if you managed to complete the alumni relic set (10 cards)...and they were super rare to come by - literally.

Cards on the Topps Skate app are ranked into various classes.  There's base (and their various tiers), common, uncommon, rare, super rare, iconic and legendary. The latter on the list are cards you might come across once a year if you open packs regularly for free on the app.

This Linden card is in the super rare category. I opened dozens of packs and didn't hit a single one of these alumni cards. To land all 10 needed to acquire the Linden wasn't going to happen.

Unfortunate, but it's not the first time I've found a Linden card that I'll never own. 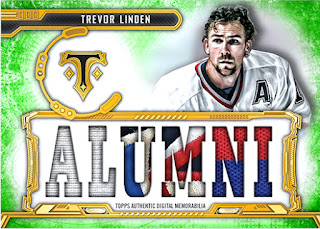 Here's the green parallel...found in the iconic category. I wish they'd have used a different design on the patch - but maybe I'm just picky.

If the super rare was next to impossible, now multiply that by about 100.

Interesting thing about this one though is that in the packs that I did open, I hit an iconic alumni patch. Martin St. Louis. I thought maybe there was a sliver of hope in trading for the Linden.

Nope. Because the Linden is an award card, you can't trade for them.

Unfortunate (again), but did I mention that there are cards out there that I'll never own.  :) 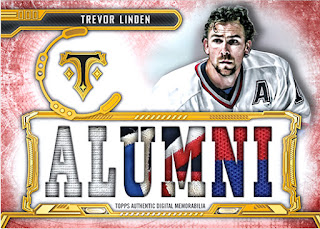 Oh, and just to kick a guy when he's down...here's the legendary red version.

It's an undeniably awesome card. I almost said "piece of cardboard"...but therein lays the catch that I have to remind myself of - these are just digital images. They don't tangibly exist.

I've seen some digital Linden cards sell for a fair penny on eBay of late. I am not there at all right now.

But talk to me in another three years.  Who knows.

Hello everyone. I hope all is well with you. It's been a busy last few weeks and haven't had much time to devote to my hockey cards, but some recent activity on my eBay timeline had me add some spring to my step.

While I might not be picking up cards at the pace I used to a decade ago, I still check eBay multiple times a day. Often, I find cards that are either overpriced (in my opinion) or new items that are still in that initial wave of frenzy. Recently, there hasn't been much excitement in the new listings at all (same old stuff showing up). That is until about a week and a half ago.

Trev has found his way into the new OPC product with a manufactured patch trophy card - I was very surprised to see it...and am looking forward to picking that one up soon (hopefully at a local show this spring). But the card that really had me going was this one... 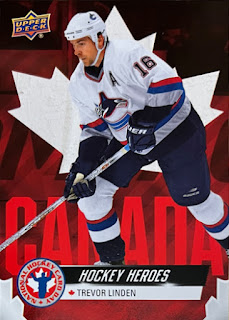 2022 Upper Deck
#CAN-13 National Hockey Card Day
Hockey Heroes
I was legitimately confused when I first saw all the postings selling NHCD sets. Never in a million years did I expect him to make it on the checklist...but here we are.
And I am THRILLED. I couldn't wait to pick up a copy. I would've loved to have opened it up in a pack...but that wasn't to be. Thankfully, my local shop kept a copy aside for me and I picked it up a couple days ago.
This card has me just as excited as any other card I have picked up in the past 6 months...maybe even more excited. It really reinforces just how much I love collecting Linden cards.
It's a cool card design, inserted into a product that thousands of people (a lot of kids) opened last weekend. Most probably were happy to see it only to finish their set, but I hope there were a few that actually took a moment to look into who he was as a player.
Very, very pumped to add this one to the collection.
Posted by bamlinden at 12:51 PM 2 comments: