Well, I knew that this would be coming.

June and July are without question the busiest months for me at work. Battling 6-7 days a week and at times pulling much longer shifts, if I can get to 'laundry' on the list of things to do....I'm happy.

Not neglecting the blog, just knowing that it's not high on the priority list right now. Hopefully I can get back to it here by the weekend.

Thanks for understanding.
Posted by bamlinden at 11:29 PM No comments:

For those of you who have been following it....it's crazytime.

For those of you who have not....venture on over to the auction of the century.

When bidding ended at 9:00pm Eastern, the highest bid was just under a half-million dollars. But because of the '10-minute rule', the auction has continued and is now over a million bucks.

That is insane!
Posted by bamlinden at 8:05 PM 7 comments:

STASHED IN THE CLOSET: Card Locker

Well, I'm finally breaking out one of my favorite collectibles ever. 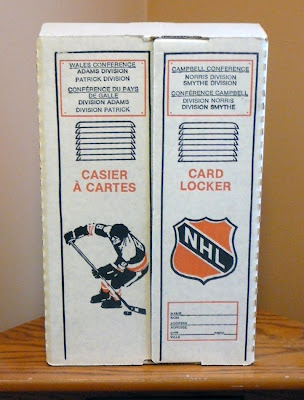 O-Pee-Chee Hockey Card Locker
These lockers were a precursor to the monster boxes that are out there today. These classic cardboard containers were stacked 5-6 high in my closet as a kid. One for every year of my collection.

You could get these by saving the wax wrappers and sending them off (with a few bucks to OPC and they would fire one of these babies off to you.

I love how it has a little section for your name and address. Then everyone knows where your awesome collection resides. 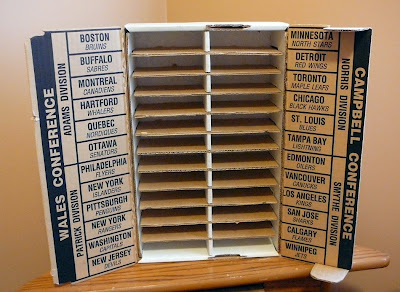 Split into conferences, divisions and teams, they were a fantastic way to quickly sort and save your cards.

That said, I was so rough with my card lockers that the cards inside were thrashed...but I didn't care. What was all the fuss about condition. That's crazy talk.

Sadly, all of my card lockers eventually found their way to the trash when I got out of card collecting in the late 80's. 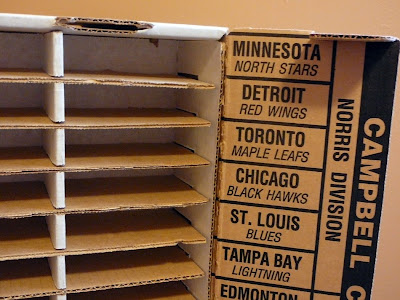 This locker is one that I purchased at a flea market a number of years ago. I couldn't believe the condition of it. And at $10, I thought it was a steal.

Unfortunately, it's one of the later releases of the locker (as noted by the addition of the Tampa Bay Lightning).

Still, a very cool trip down memory lane for me.
Posted by bamlinden at 11:56 PM 11 comments:

BEHIND THE MASKS: Patrick Roy

One of my favorite insert set subjects would definitely be goalie masks. I love the closeup shots that appear on some of these card sets (Pinnacle Masks, Between The Pipes Masks, ITG Masked Men....the list goes on).

One of the more unique insert sets would be the Donruss Painted Warriors sets from the mid-90's. There were two seasons where they put out clear die-cut cards of goalie masks. I really like this concept.

Why is it then that it took forever for me to complete the 1996/97 set? Who knows. Maybe I was just lazy about getting the last card. Maybe I didn't want to spend a ton of money finishing it off. Maybe I just couldn't find the card.

Well, the big card show here in town last month finally put this baby to rest. Now I can sleep better at night. 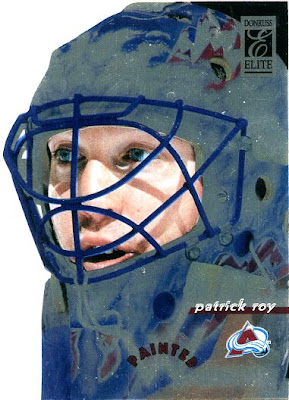 1996/97 Donruss Elite
Painted Warriors
#1 Patrick Roy /2500
Now, while I like this card and the set, I personally am a bigger fan of the other year's release. These cards just have a dull feel to them and it's tough to even read the text on the front (can you read what it says under 'painted'? Neither can I). The photo is ok (I had to bump up the contrast and brightness to get a better sense of it in the scan) but I really think they could have done a better job with the design.

Well, with the NHL season now officially done for another year, I thought I'd give my thoughts on collecting over the summer.

Back when I was a kid, hockey card collecting was a very small window in my 12-month year. OPC would release their product, I would go bust some packs, there would be some trading and eventually, I would finish my set (or abandon it as my cash flow was pretty non-existent).

Summer would come and the thought of hockey cards would be a very distant memory. Back then, it was baseball cards. Add to that the fact that there was tons to do outdoors, vacation time, and no reminder of the NHL at all.

Nowadays, the NHL 'vehicle' is a year round show. Preseason starts in September and the Finals end in June. You have the combine, free-agency, the draft and blamo - you are right back into next season before you know it.

The same holds true for cards.

Before, it would be a small 3-4 month window with only one set to chase. Now, you have sets being released every month (and with the addition of another license, that will only increase).

For me, primarily being a player collector, I was searching year round. Things would ease off during the summer, but I would sometimes find great deals because others weren't looking for the card I needed. As for sets, I don't mind the release of cards all year....I just hate that one season blends into the next. There should be a hard date set and any cards being released before it given the date of one year and after it the date of the next.

Ultimately, the barrage of product out there is a good thing. I don't like everything....so I don't look at everything. Just because it's been released doesn't mean I need to collect it (that was me a number of years ago - I learned my lesson).

Parameters and decisions from the collector determines the best time to buy or trade or sell or whatever.

It's just still a little weird to me to see new product come out in the middle of a gorgeous summer day.

I'll head to the store another time then.
Posted by bamlinden at 5:23 PM No comments:

TO THE BIKE SPOKES!!! - Rogie Vachon

Alright. I alluded to it in my last "To The Bike Spokes" post and today, I will unveil what I consider the 'holy grail' of crappy cards.

This one goes back a long ways. It shows just how badly a card company tries to be relevant by having photos of players in their current team's uniform.

Prepare for the ugly!!! 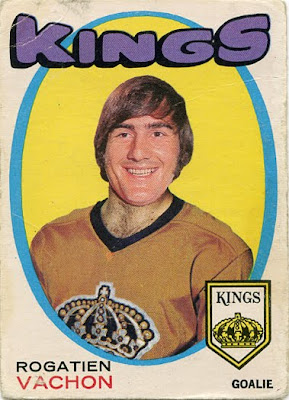 What a butcher job on that cutout. At least try to get a guy with the same level of tan as you. Or maybe some consistent body hair.

Rogie had been a Montreal Canadien his entire career until he was sent to Los Angeles. OPC decided it would be best to plunk his face on the body of a current Kings' player. 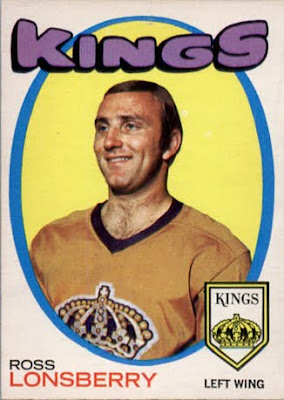 I think the clincher for me is the smirk on Vachon's face. What a terrible card.

Today's mailday brought with it a huge add to my 1 vs. 100 project.

A definite highlight of my existing collection. 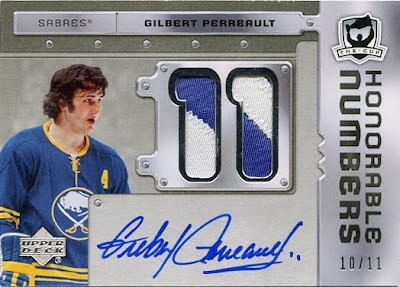 I obtained this card from an avid collector whom I've been making cut signature cards for. He asked if I would like to try my hand at some other customs. Absolutely.

He sent off the signatures along with the Perreault and they arrived today.

Thanks again Greg and I hope you enjoy the customs that will be coming your way.

Showing off some more vintage stuff in this installment of 'Cardboard Photography'.

The 70's was a bit of a mish-mash when it came to the photos to be put on cards. Some were downright nasty - either cutting out the background completely or having them stand in front of the infamous blue wall.

On occasion though, there would be a card that is eye-catching. Often, the card wouldn't even be spectacular in terms of photography. But what was captured shows that moment in time...that era in the 70's where tradition met evolution.

This card fits that bill to me. 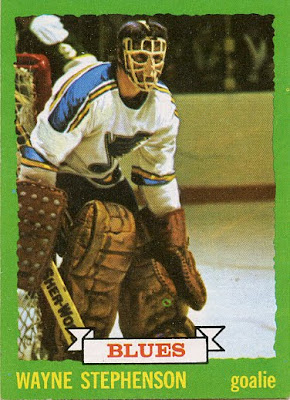 It looks like a simple card with a simple photo, but it says so much more to me.

For some reason, the card just feels 'bigger' to me. Probably due to the photo and the full body shot that fills the card from top to bottom.

I like everything about it. The vintage jersey, pads, blocker, glove, stick and of course....that mask. What a beauty! One of the few pretzel-style masks captured on a hockey card. It's a shame there weren't more.

I like the framing of the photo. The left side just full of 'stuff'. Stephenson's eye sharp on the play, anticipating what's about to come. His crouch in the net which you get just a glimpse of. The right hand side is empty. It gives the sense of energy and the moments before the action. I always wonder what is happening in the play in the corner. Are the Blues killing a penalty? Are they scrambling out of position? Is somebody laying out a huge check?

The quality of the photo reeks of a past era. It's definitely not 50's style, but it's equally not of today's standards.

With the Blues a newly formed team in the NHL at the time, it also captures a timely moment in the history of the NHL.

In the end, a hockey card photo is whatever YOU may interpret it to be. For me, this card is truly one of my favorites.
Posted by bamlinden at 9:16 PM 4 comments: