LINDEN CARD(s) OF THE WEEK - A Few Recent Pickups

I've been thinking about my Linden collection quite a bit recently...for a number of reasons.

I've thought about how much I've invested into my PC these days - a far cry from the weekly snags a number of years ago (or multiple cards in a week). I've been going through some of my old Paypal receipts...yes, I keep those, and for good reason, and I'm shocked at how much cash I've dished out. I'm thankful that I've realized I can still thoroughly enjoy this hobby without destroying the bank account.

I've also thought about my collection with regards to how I want to share it on social media. I've started a personal website (more for work reasons) and I want it to reflect who it is I am.  This hobby is without a doubt part of who I am, but will I potentially turn people away if I start bombarding it with cardboard content? Same holds true for Twitter or Instagram.

I plan on sharing, but I don't think it will be the foundation of my content.  This blog, however, will be a place to come for all things hockey cards.

So let's show off some of my most recent acquisitions. 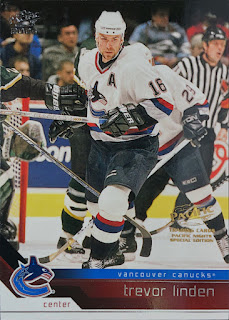 2002/03 Pacific
#379 SHOW Pacific Nights  /10
For those who know what these are...know how absolutely jacked I was when I saw this.
I've been chasing this impossible to find show card for....well, almost 20 years. I had to do a double-take when I saw it land on ebay last November. Yes, it's a show stamped card, but that doesn't take away how desirable a piece of cardboard like this is for a completist like me.
What gave me the confidence to go hard on this one was the fact that my Linden purchasing last year was quite minimal. I knew that I could splurge....I was a good boy in 2020.
To my surprise, I landed it for about half of what I thought I'd end up paying...even better. Limited to just 10 copies, I would be very surprised if I saw another copy of this hit the open market.
Now that said, I've seen an absurd amount of early 2000's show cards pop up on ebay of late. Somebody has stacks and stacks of them...but they're pricey.
I'm kicking myself for leaving a couple a little too long - it seems the ones I needed were the first to sell.
Figures. 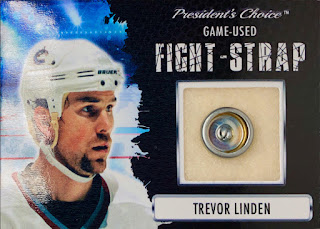 2019/20 President's Choice
#NN Game Used Fight Strap  /3
I haven't dabbled too much in the world of President's Choice. Dr. Brian Price (from the In The Game days) has ventured out into this smaller-production, direct purchase landscape. He knows his stuff and the response has been really strong over the past few years.
Linden has had a few really nice cards get created - many of them 1/1s, and the price tag to boot. Like I said, they're nice...but I just can't drop the coin like I used to.
I saw this fight strap card pop up on ebay with a decent price attached.  It went quick and so I headed over to the doctor's website to see if either of the other two copies were still available. There was one left.
I bit my tongue and bought it. Make no mistake, it's a really nice card and I'm thrilled to have it in the collection. Check out the way the snap pops out of the card... 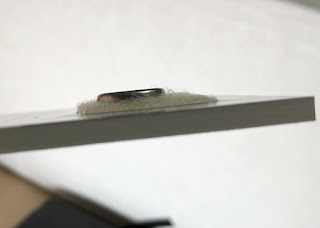 Seriously...that's how it's done.
I laugh when I look at it now because about a week after I bought the card, there was a site-wide sale on products. Serves me right not to pay attention to things like Black Friday sales, Cyber Monday or what have you.
No regrets on this one. It's a toughie at just 3 copies. Glad to have it. 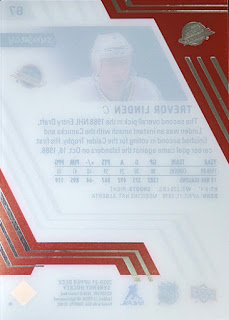 2020/21 Upper Deck
#67 Synergy Legend Red "error" blank front
OK....this one is both cool to own and a huge question mark.
I'm a fan of the oddball stuff. Error cards, misprints, I'm all over that...but only if it's inexpensive. After all, these are not official checklist-type stuff. So when I saw this card pop up on ebay, I was immediately intrigued - and with a ton of questions.
I've seen guys try to do some funky stuff with cards to sell them as "errors". Peeling the foil front and calling it a "proof", taking the eraser to the ol' early-90s Upper Deck cards. I've seen my fair share of fakes.
But this was the only copy of this Linden I had seen pop up (and to this date it's still the only copy like this I've seen). It looked pretty clean, so I threw a minimum bid on it. It ended up winning. I think I paid more for the shipping than I did the card.
Not a few days after I have the card in hand and I see a couple more of these "error" cards pop up by the same seller. Now something smells fishy. On the same day, I see some posts on social media showing peeling along the bottom of some of these cards. Now I feel like I've been duped.
I reached out to the seller and asked. He claims to have bought the cards from another guy. Is that really the case? I dunno. But I've let it slide and am tossing this on my master checklist. It was a couple bucks. No harm, no foul.
I still think it's a really cool looking card....but my mind has to say "it was a misprint" for me to think that.  Ha ha. 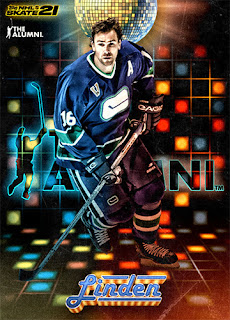 2020/21 Topps
#13 Skate! Disco Series 3
Well, I might have found the first digital Linden card that has me cringing.
I've been a big fan of the Topps Skate! app for a couple of years now. Great fun opening virtual packs - and it hasn't cost me a single penny. I've added a number of nice Linden cards to the collection - and yes, they go on the master checklist too.
This disco card though...yikes. I'm giving it a single John Travolta shimmy out of five. 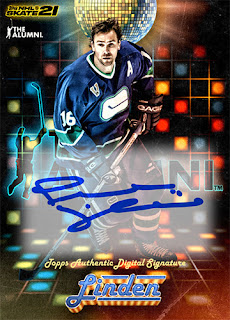 2020/21 Topps
#13 Skate! Disco Series 3 Signature
Oh...and he has a digital signature parallel as well. This must be the online equivalent of a sticker autograph.
Oh well, they're in the collection and without too much of a fuss. I've got to credit Paul over at Card Boarded for tipping me off that Trev was included in this set.  Much thanks.
Well...that's it for now. Boy that was fun. I promise to do this more often.
Posted by bamlinden at 11:42 PM 6 comments: