BEHIND THE MASKS - One Old, One New

I'm very excited to see the latest bubble envelope hit the mailbox today.  It contains my recent COMC order (one that I have been building for the past year).  There are so many goodies to be had that it'll take a number of blog posts to get through it all.  Nothing wrong with that!!

Rather than jump in to the main course (spoiler....it's a plethora of Oscars), I'll go with something simple tonight....seeing as I'm watching the Flames game and reading a little Dave Bidini during the intermissions.  How about a mask card that almost finishes a long-standing set. 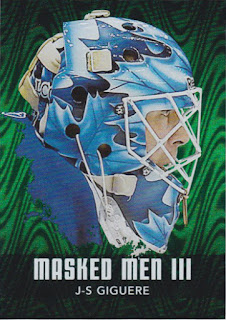 This is one sweet lid!!  Love the profile shot showcasing the great design painted by Marlene Ross.  This overlapping leaf layout really shows some depth and creativity that can be appreciated from a ways back - which is how it should be.

I don't know why it took me so long to land this card...it's not like J.S. is a high profile goalie.  Must be the fact he was playing for the Leafs at the time.  Regardless, it leaves me with just one lowly card left on the wantlist to complete the set. 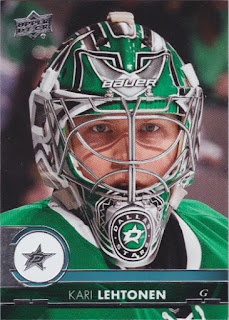 Here's a bonus card from this year's Upper Deck Series I product.  Saw it and immediately had to have it.

Why can't more goalie base cards be like this?

Why couldn't goalie cards of the 60's and 70's have been like this?

Oh well....it's one more sweet mask card to go into the binder.

Slowly getting closer to the Christmas break and I am chomping at the bit.  It's been a long, busy year and things are starting to ease up as we head into the final weeks of 2017.

More items are being flung off the work plate and I couldn't be happier.  Already though there are rumblings that next year could be my busiest - but most rewarding - when it comes to opportunities.  I'm already looking forward to it.

But before then, I plan on enjoying some much needed R&R.  Three weeks off over the Christmas break is on the schedule and it'll involve getting caught up on a lot of things....but more importantly, it'll be a chance to recharge my batteries.  Heck, I've been joking with a few people that I'm still trying to get my year started.

It's been a much slower year for me when it comes to my Linden collection - collecting in general and as a result my postings here have been scarce.  But some time today to relax and watch some hockey has me in a scanning mood.  Add to that my most recent Linden pickup and this post was destined to happen. 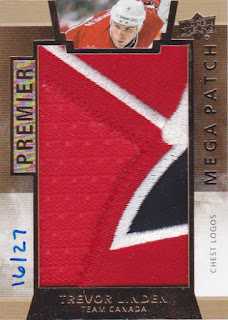 These mega patches put out by Upper Deck a few years back are probably my most favourite cards to chase.  I really like that UD put Linden in his Team Canada garb for this product and the mega patch concept is a can't miss.....especially when you have the opportunity to piece them together like a puzzle.

So....as with all unique (1/1) Linden cards, I've been keeping tabs on each and every mega patch to hit the open market.  I've been able to land a few of them (six) but there are many more that have made their way into other Linden collections.  So a scan will do......and that is all I am looking for in that respect.

So here is a quick grid of the 12 Linden cards that I've personally seen and you can see it really fills out the crest nicely.  It's interesting to see how the whole right side of the leaf is hardly represented.  Odd.

Here's a better look at how the cards fill the picture...

I hope one day all 27 cards will surface so that I can complete the picture.  To know that they all have been cracked out of packages (and that I've been able to scan them) would be an incredible achievement.
Posted by bamlinden at 3:51 PM No comments:

Cleaning more stuff off my desk today.  Saw a stack of goalie cards and a binder of older cards on the shelf beside.  Decided to pull the scanner out and have some fun.

Here are some of the tenders currently residing in my collection/tradebox (depends on who you ask). 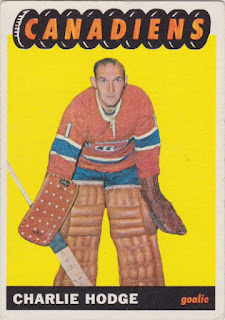 This is about as old as I've got - if you don't count a couple of Parkies in my PC. 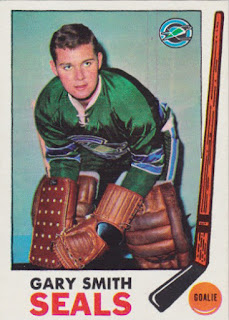 Lots to love about this one.

And the card is in great condition to boot. 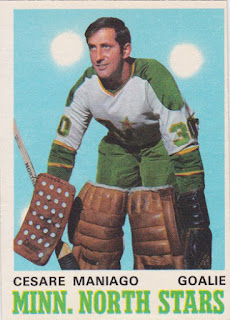 Always been a fan of Cesare and his awesome masks.  But here's one of him sans lid.

Is he even wearing equipment?? 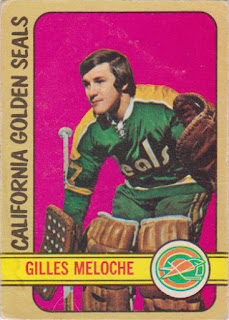 We need more of these portrait shots on our cards eh? 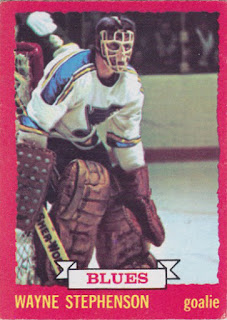 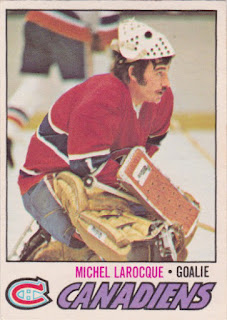 Bunny on the verge of getting the net to himself in Montreal.

Not the mask I think of when I hear Michel Larocque. 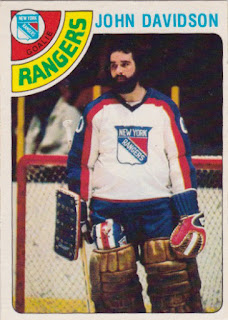 How cool are you when you're sporting a beard like that, have your mask tucked into the top of your pad and sport the double zero on your back? 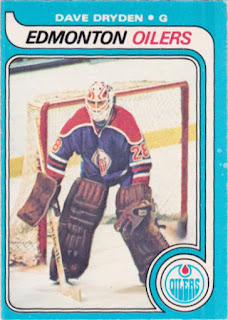 The less popular Dryden in most people's eyes, but I have a special admiration for him.

He was the first goalie to introduce the (what is now commonplace) cage-mask combo style of goalie lid.

And look at those pads!!  They can't be regulation height? 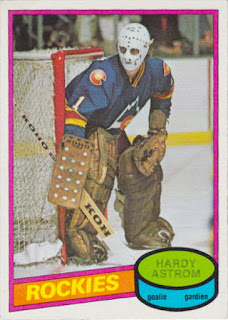 My favourite Colorado Rockies goalie of all time (sorry Chico).

This is a great photo of him in net.  Looks like he knows what he's doing. 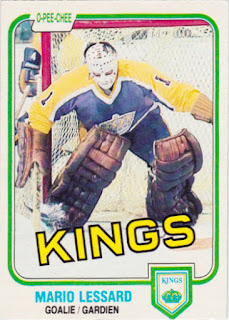 If the five hole is between your legs, what's the spot directly over the head called?  Definitely a weakness in Mario Lessard's game me thinks. 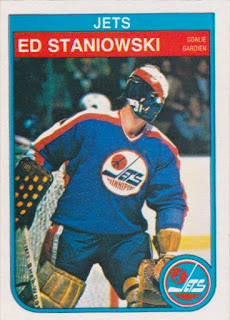 I had the pleasure of doing a quick interview with Ed Staniowski about 15 years ago when he was in town for a 3-on-3 charity tournament.  He looked like he could beat the crap out of anyone and everyone in the building.  Dude is in shape!  But boy was he ever a nice guy.

I've got to dig up that interview one of these days. 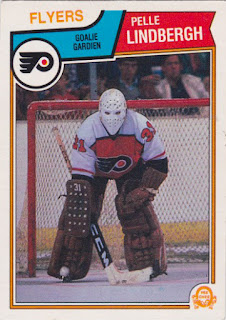 My first ever NHL game I saw in person was the 1985 All-Star Game.  Yeah Gretzky, yeah, Kurri, yeah Bossy and Trottier.  Yeah rookie Lemieux.  But Lindbergh.....he was the star of the show for me.

He was so good. 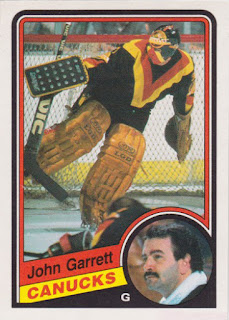 Speaking of All-Star games.  Remember when John Garrett had to fill in for Richard Brodeur and nearly snagged MVP honours in 1983?  That was until the Great One potted four in the third to steal it away.

What's not to love about this card. 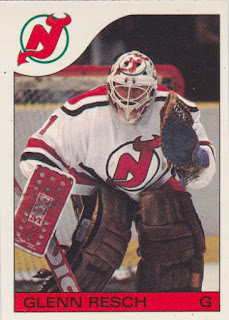 I felt bad about what I said Chico.....here you are in Devils gear.

He looks so odd. 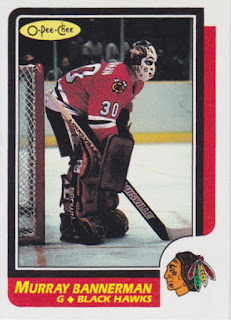 This is an "action shot" in comparison to others. 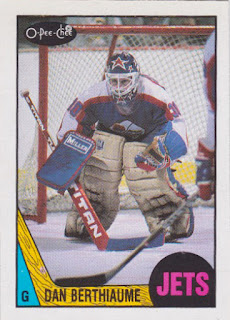 The Bandit!!  Looks like he got lessons from Mario Lessard.

And how about that killer red Titan goalie stick!!  He was probably the coolest kid on the block.

Masks started getting boring about now. 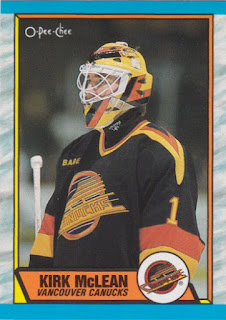 Hold on....spoke a little too soon.  Love the yellow version of this Kirk McLean lid.  That is a sweet setup.


So there you have it.  A little random goalie show & tell for no better reason than I wanted to.