One of the toughest tasks a player collector has is tracking down all of those pesky parallel cards that have crazy low print numbers. In terms of cards, the showcase card in my collection is my one of one (1/1). The only one of its kind in the world. Obviously it's pretty much impossible to track down these rarities. One is pretty much stuck to having to be in the right place at the right time.

There is such an abundance of these numbered cards that I got thinking, is there a card numbered out of every number between 1 and 100? I started sifting through my traders.

Without hardly trying, I found 9 different ones. I decided to start (yet another) side project.

The parameters I'm setting in place on this one is simple. This will not cost me an arm and a leg! The serial numbers must appear on the front of the card! I must have all 100 in possession to call it a done deal!

Here's what I've got so far: 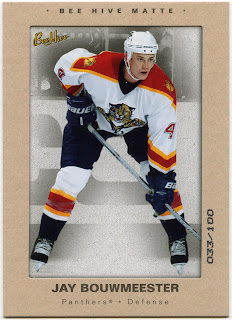 Cards numbered /100 will be the easiest to find hands down - math says so.

The task was which one of my cards /100 do I pick. I went with Jay Bouwmeester to celebrate his arrival to Cowtown and the Calgary Flames. 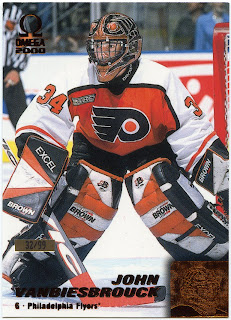 Cards numbered /99 are pretty common too (must be a Gretzky thing). I thought to myself - I'll have no use for this John Vanbiesbrouck card. It will do nicely. (side note: I should do a set of players with ridiculously long last names) 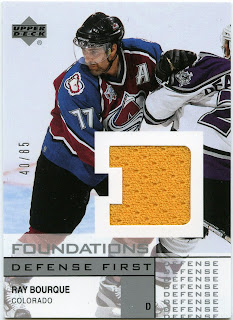 Here's a nice card /85. A little more obscure of a number and it's a Ray Bourque jersey card to boot. A nice addition. 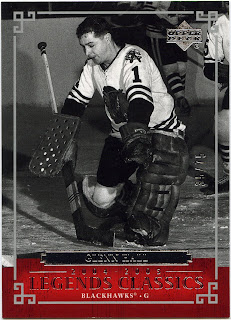 This Glenn Hall is /75 - yet another common serial number. I guess it's good to get the easy ones out of the way early. 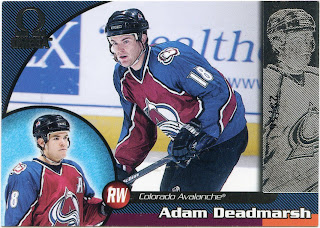 Hey, what's this? A card numbered /56. Why? Now here's my questioning about serial numbers. Who made the call on "56"? What's the reasoning? It seems a very generic and not well thought out plan.

Still, it's one that fits the bill for me. 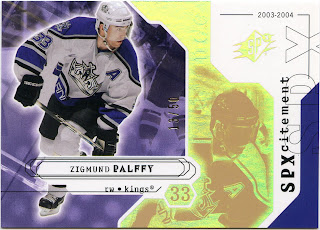 This Palffy is /50. Now were getting into the "tougher to find" classes. 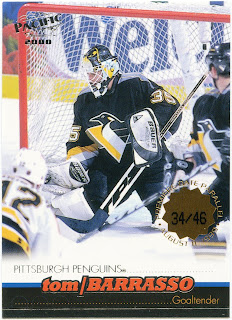 This Barrasso is /46. Again - why? Nothing better to do? Thankfully he has a home now. 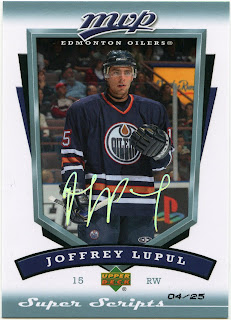 A nice Joffrey Lupul card /25. I remember picking up a few of these cards /25. Surprisingly cheap too. 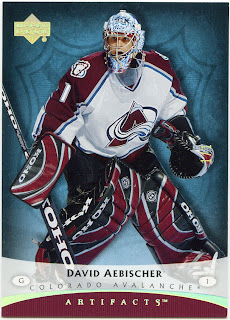 Hey, why not get the big boy out of the way early. This Aebischer is numbered 1/1 (you can see it on the right hand side half way up). I got this card a couple years ago (when Dave was doing a little better than he is now). Quite honestly, I'd rather keep it than try and sell or trade it - I know I'd take a loss on it.

Well, that's nine cards....I'm almost a tenth of the way there and I haven't even tried. The next card show I go to, I'll be keeping an eye out on some cheap serial numbered cards. I'll let you know how I fair down the road.