This week's Trevor Linden card is one of my favorite patch cards. I own a few patch cards of his, but this one would be the nicest and most "busy". 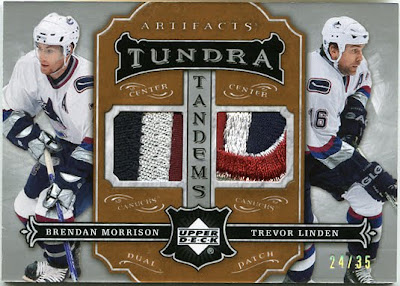 When I started collecting Trevor Linden cards back in the 90's, jersey cards were just being introduced into the card collecting world. I thought they were the coolest looking cards....but boy were they expensive.

Part of me was hoping Trevor wouldn't have any memorabilia cards - it would break the bank.

It took about 4-5 seasons before Linden finally got a jersey card. Sure enough, it was going for around $125. For what now would be considered as "a plain old lousy white jersey card". It took me a few years before I tracked one down for a price I was willing to pay (I think I got it for about $40). With that started the journey into game-used memorabilia.

Nowadays, jersey cards are so readily available that I've started seeing them in the dollar bin. Thank you oversaturation of the market.

I do have a few of those as well (and they tend to be my favorites in my collection), but I don't pull the trigger on those nearly as fast as other cards. The prices are still crazy. (couple that with a few diehard Linden collectors and it can become a pricey endeavour.

The patch on this Linden card looks awesome. I have no clue what part of the crest it comes from...but it sure beats the boring single color patches I've seen on other cards.

And thick! This card is nice and fat...and the patch bulges out a bit too. The scan really doesn't do the card justice.

I have seen (or have had in my posession) about a dozen or so cards out of the 35 made, and I can say hands down that this card is the nicest.

Oh, and Brendan Morrison is on the card too. Yay.
Posted by bamlinden at 9:21 PM