It's been a while since I've updated you all on my hockey pool. There have been many ups and downs. Mostly ups for me and downs for everyone else. 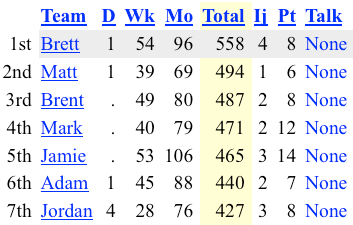 They say that good goaltending is critical in order to be successful. No question - my goalies have gone above and beyond so far this season.

Martin Brodeur, who at the the start of the season was a question to even make the Olympic team, has played himself right into the starting role. Now if he could just break the shutout record we could all get back to normal. He is on fire this year.

Ryan Miller, who probably played himself into the starting role for the US, is quietly having one of - if not his best year overall. They are one, two in my standings.

Varlamov, who has only one loss this season, is still not being given the reigns as starter in Washington. How Theodore is still playing at all is beyond me. Here's hoping Simeon gets some more starts in the future.

As for my defencemen, Mike Green has really turned it up a notch lately. He has more points than any of my forwards. Yikes.

I've got to say, I'm getting good solid, consistent production from a lot of my forwards. Zetterberg, Nash, Malkin, Stamkos, Alfredsson, Eriksson, Lecavalier, Sharp, Whitney, and the list goes on.

The injury bug isn't too much of a factor, but I can't afford another long term loss.