Wow! I hadn't realized that it has been 2 months since my last 'One Sheet, One Set' column. Let's fix that right now.

With the Winter Olympics less than a month away, I thought I'd take a look at a more international set. Ya know....change it up a bit. 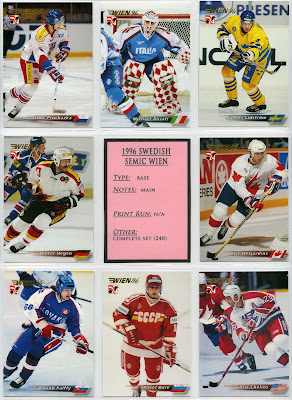 1996 Swedish Semic Wien
This set was one of the few sets not readily released in North America that I was able to find with relative ease. I think it was a highly produced set (as it's not an overly expensive find), and is rather basic in its premise.

It's a 240 card set that highlights international hockey. Players from Olympic and World Championship teams.

As you can see, it had a drastically different look than the NHL sets out there at the time. Seeing the colors of Germany, Italy, Slovakia and Russia just weren't prevalent at that time.

There are no inserts or jersey cards. Nothing more than simple base cards. Sometimes, there's nothing wrong with that. That said, this release could have really created quite a stir with the addition of autograph inserts. For some reason, international autos have always had a huge appeal in the hobby. I don't really know why. 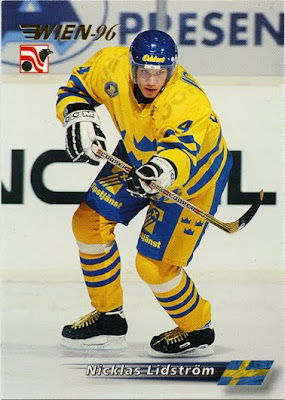 The front of the card reveals a very basic looking design. Almost too simple. No borders, no glitz, no flash. I'm going to give it points for that. Let the photo tell the story. Shots like this Lidstrom speak for themselves. Simple, yet effective. There is an above average photo selection for the set.

For a card front with next to nothing on it, you know something's wrong when it looks like the 'Wien 96' logo at the top is too much. Something smaller or simpler would have been better.

The name and flag at the bottom are again simple, but it works for me. The only addition might be the name of the country (for those of us not caught up on our flag identification). 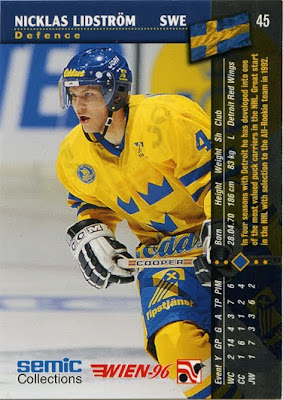 The back of the card lends a little more disappointment for me. The layout just doesn't work. Is it a sideways card or a top-to-bottom deal? I appreciate that they use a different photo, but something a little more dynamic would have been nice - like an real tight closeup or something.

The name, team, position at the top are ok and the flag again works for me, but the sideways stats are a big bust. It looks like basic photoshop stuff and lacks flair or creativity. The logos at the bottom are a mess. I just think the whole layout of the back could be way more improved.

Overall, a nice set to build and a chance to see some NHLers in their country's colors. Unfortunately, for every Nicklas Lidstrom you get, a Dieter Hegen is soon to follow. I guess that's the price you pay for an international set.

I think given it's large production quantity, this set could be had for under $10. It might be slightly harder to track down, but might make a good chase for those bored with the early NHL sets.